The case study presented here is an example of how diagnostics and therapeutics can be used in the management of a cancer patient. The case study is not intended be prescriptive or to imply that the approach taken here is the only way to manage an osteosarcoma patient, nor is it intended to be used as a diagnostic tree. Practitioners interested in oncology are encouraged to research current diagnostics, chemotherapeutics, and modalities appropriate for each cancer patient as the best way of keeping current in this rapidly evolving field of veterinary medicine. The case history includes the rationale for “decision points,” the interventions the clinician would make in appropriately treating the patient.

A 9 yr old, male, neutered Labrador retriever mixed-breed named “Bo” presented with a 2 mo history of mild lameness in the right front limb. The dog was an outside farm dog from rural Tennessee. Bo had been seen by another veterinarian 1 mo previously and was treated with a NSAID for 2 wk. The owners had not seen an improvement.

On physical exam, Bo had a body condition score of 4/9. He had a grade 2/4 lameness in the right front limb and was mildly painful over the right carpus with no visible swelling. Distal limb radiographs revealed an osteolytic and proliferative lesion of the distal carpus (Figure 1). The lesion did not cross the joint. Threeview thoracic radiographs revealed no visible lesions and were considered normal.

Decision point rationale: Approximately 8% of dogs with osteosarcoma have visible metastasis on radiographs at diagnosis. Other diseases on the differential list are a metastatic bone tumor and infectious disease (bacterial, fungal). These considerations were discussed with the owner and a fine-needle aspiration (FNA) of the lesion was recommended.

Decision point rationale: A FNA is often diagnostic and is less invasive than a bone biopsy. If the cytology is consistent with sarcoma, an alkaline phosphatase (ALP) stain may be used to confirm bony origin. A percentage of cartilage tumors will also be ALP-positive. 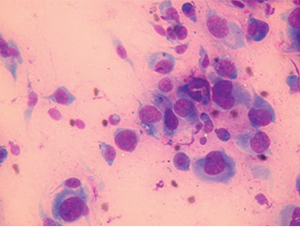 Cytology of the FNA confirmed sarcoma and an ALP stain was positive (Figure 2). Based on these findings, the physical exam, and the patient’s history, a diagnosis of OSA was made.

Decision point rationale: If a referral is made, follow-up care by the primary care veterinarian is appropriate. Therefore, it is important that the primary and referral veterinarians discuss postoperative care, follow-up blood work, and management of any potential side effects.

The owner elected to pursue further staging diagnostics and was considering amputation with follow-up chemotherapy. A complete blood count, comprehensive chemistry profile, and a urinalysis were performed to rule out comorbidities. Elevated serum ALP is a negative prognostic indicator. Additional staging considerations would entail referral for a bone scan to identify other bone lesions (<10% of cases have detectable bone metastases) and abdominal ultrasound (<10% of dogs have intra-abdominal metastases). Results of the blood work and urinalysis were normal.

A forelimb amputation was performed and recovery was uneventful. At the time of suture removal, carboplatin chemotherapy was initiated and given IV once every 3 wk for a total of four treatments. Decision point rationale: There are multiple chemotherapeutic treatment options for osteosarcoma. Chemotherapeutic agents with proven efficacy include doxorubicin, cisplatin, and carboplatin. However, studies generally have not shown clear differences in outcome between the various protocols.

Bo returned to normal activity. His quality of life improved after amputation of the forelimb and alleviation of pain. He tolerated his chemotherapy well, but required a few days of antiemetics after two of the treatments.

Three-view thoracic radiographs were performed every 3 mo following completion of chemotherapy. Nine mo after the last chemotherapy treatment, radiographic evidence of metastasis was found. Bo was normal clinically and enjoyed a good quality of life.

The primary care veterinarian discussed Bo’s prognosis with the owner, including the likely terminal nature of the metastatic OSA and scenarios for the patient’s quality of life. Because Bo currently had a good quality of life, the owners opted to begin therapy for the metastasis. Bo was placed on a TKI for the management of his metastatic disease.27

Decision point rationale: Cancer should be considered and treated as a chronic disease much like end-stage renal disease or heart failure. Once metastatic disease becomes clinically apparent, a realistic goal of therapy is to attempt to stabilize it or slow its progression. Metronomic chemotherapy and TKIs are both excellent considerations in this scenario. For most owners, maintaining a good quality of life is the most important consideration.

Three months later, three-view thoracic radiographs revealed that Bo’s metastatic disease had not progressed and was stable. Bo continued to maintain a good quality of life for 6 mo until he eventually became dyspneic. Advanced metastatic disease was documented radiographically, and the owners elected euthanasia.