Chemotherapy is now a commonly used treatment modality in veterinary cancer medicine. Conventional chemotherapy, metronomic chemotherapy, and targeted chemotherapy using tyrosine kinase inhibitors (TKIs) are all currently available to the small animal practitioner and differ in their indications and goals. Therefore, in order to be successfully used in practice, the clinician must be aware of some of the basic principles of each approach. Knowledge of the appropriate administration techniques and potential side effects of the drugs to be used is also essential and will be covered in later sections.

Conventional chemotherapy is also known as maximally tolerated dose (MTD) chemotherapy. This refers to administration of chemotherapeutic agents at the maximum recommended dose followed by a recovery period for drug-sensitive cells, such as those of the bone marrow and gastrointestinal tract. Although this approach maximizes tumor cell death and is associated with a low chance of serious side effects, the periods between treatments may also allow for tumor regrowth.

Depending on the tumor type being treated and the stage of disease, MTD chemotherapy may be given alone or as an adjuvant to surgery or radiation therapy. It is indicated for treatment of tumors known to be sensitive to drug therapy, such as hematologic malignancies (lymphoma, multiple myeloma), and for highly metastatic malignancies, such as osteosarcoma, hemangiosarcoma, and high-grade mast cell tumors. When conventional chemotherapy is used against solid tumors, such as osteosarcoma, it is often used in an adjuvant setting after primary tumor treatment to slow progression of occult micrometastatic disease. Occasionally, drugs are also given in the neoadjuvant setting to downstage a chemosensitive primary tumor (such as a thymoma or mast cell tumor) prior to definitive surgery or radiation therapy. The two main objectives of conventional chemotherapy are tumor control and maintenance or improvement of the patient’s quality of life. Table 3 (found on page 191) lists chemotherapeutic agents with anti-neoplastic activity that are commonly used in veterinary medicine.2

Despite the promise of metronomic chemotherapy, this approach is currently limited by significant gaps in knowledge regarding optimal dosing schedules and drug combinations. The types of cancer best suited to metronomic therapy and appropriate ways to gauge tumor treatment response are also currently unknown. However, there have been several published studies in veterinary medicine, most of which were prospective phase 1 and phase 2 trials that investigated the use of metronomic chemotherapy. The most common neoplasms evaluated in these studies were hemangiosarcoma, soft tissue sarcoma, and transitional cell carcinoma. An assortment of other neoplasms were also evaluated (osteosarcoma, melanoma, and assorted carcinomas) but in a much smaller number of patients.7–11 In the majority of these studies, the oral chemotherapy drug cyclophosphamidea was used.8–10 Other chemotherapeutic agents that have been assessed were lomustine (also known as CCNU) and chlorambucil.7,11 These oral chemotherapeutics were often combined with a nonsteroidal anti-inflammatory drug (NSAID) due to the anti-angiogenic properties of the NSAID drug class.5 Due to the generally positive responses reported in these studies, cyclophosphamide has often been used in a metronomic fashion in veterinary medicine, frequently in combination with a NSAID. 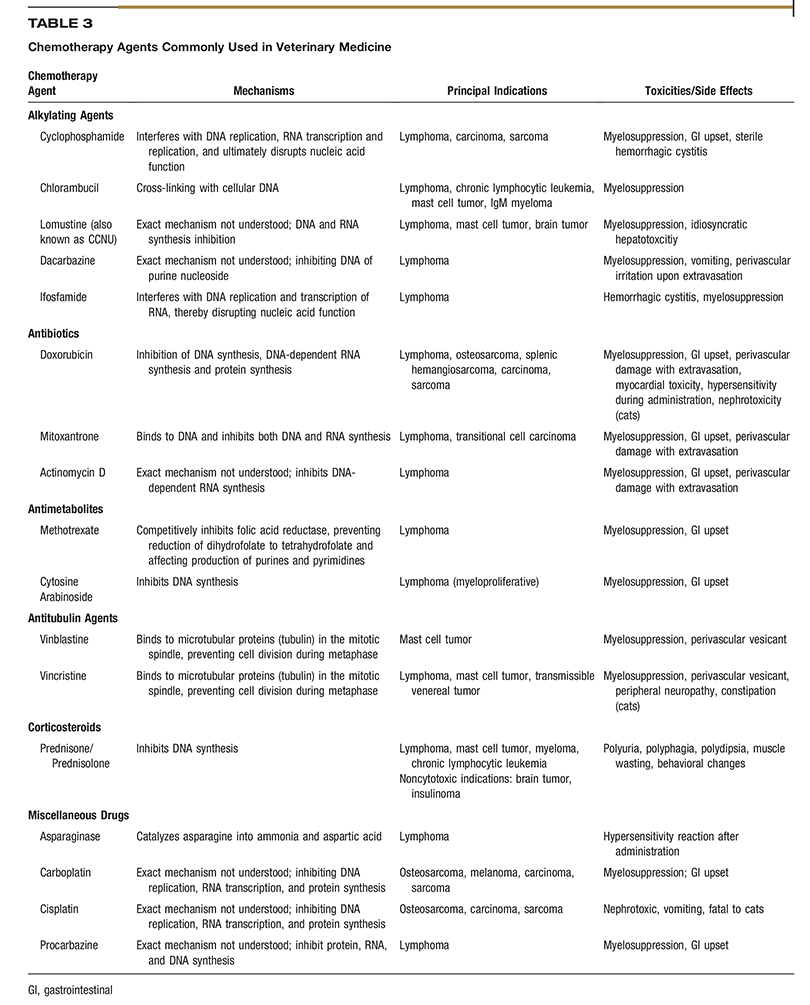 Tyrosine kinases are enzymes that are responsible for the activation of proteins involved in the signaling pathways that regulate normal cell proliferation and survival. Because many of these pathways are dysregulated in cancer cells, TKIs are anti-cancer drugs that block signal transduction, thereby preventing tumor growth. There are now two oral TKIs approved for use in dogs with cancer, toceranib phosphateb and masitinib mesylatec (conditionally approved in the United States), which are indicated for the treatment of specific grades and stages of mast cell disease. Although these drugs are targeted to specific signal transduction pathways, each drug can induce toxicities to rapidly dividing normal cells that also rely on these pathways. The most common side effects seen with these chemotherapeutics are gastrointestinal, including diarrhea, loss of appetite, and occasionally vomiting.12,13 Other less common side effects are hepatotoxicity, neutropenia, muscle pain, and coagulopathies. Side effects associated with toceranib phosphateb include protein-losing nephropathy, proteinuria, hypertension, and, rarely, pancreatitis.12 More widespread use of TKIs awaits further investigation of several important questions, such as the tumor types in which TKIs are most likely to be effective and their optimal combination with conventional chemotherapy agents.

Capturing the ability of the immune system to fight cancer holds significant promise for the treatment of highly aggressive malignancies, particularly for prevention or control of metastatic disease. The first U.S. Department of Agriculture-licensed immunotherapeutic agent designed for veterinary cancer patients is canine melanoma vaccined a DNA vaccine indicated specifically for dogs with stage II or III oral melanoma in which local disease control has already been obtained. There are a number of other immunotherapies currently being investigated in clinical trials including monoclonal antibodies for dogs with B-cell and T-cell lymphoma and an anti-nerve growth factor antibody that may palliate the pain associated with canine osteosarcoma. As in human clinical trials, the success of immunotherapy for companion animals will likely depend on combination treatment with other treatment modalities, such as radiation therapy and chemotherapy.