We tend to want to look at numbers, such as productivity and profitability, for clues about the health of our organizational culture, but the true measure is all about individual engagement—that is, how your team members feel and think about their roles in your practice—and the best way to find out is simply to ask them. 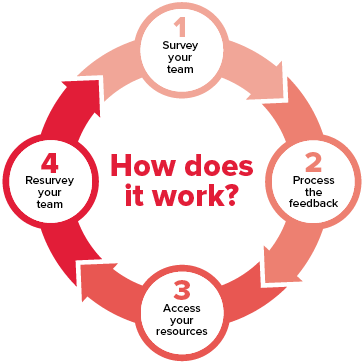 The NEXUS Experience™ is a brief survey with easy-to-use and actionable tools that allows you to begin analyzing culture at the most local level—with direct feedback from employees in real time—and apply the results to your practice as a whole.

Most importantly, it is a conversation-starter designed to involve every team member in the realization of your practice’s ultimate goal: A healthy, engaged culture that delivers an outstanding experience for your clients and their owners.

After completing the survey, each team member receives a confidential, personalized insight report with strengths-based strategies to help them increase their personal satisfaction, engagement, and growth.

Managers also receive an anonymous, comprehensive report of the team’s results with comparisons to the AAHA veterinary practice database.

By reviewing these results together, you can: