Due to an increase in recent call volume, wait times for inbound calls have been longer than usual.
Our members are very important to us as are their questions and inquiries.
We will get to your call as soon as we can; please email [email protected] at any time for additional assistance.
AAHA AAHA publications NEWStat More pet owners would choose shelters

AAHA - 11/14/2010
According to a recent poll, pet owners are more likely to obtain a new pet from an animal shelter or rescue than from a pet store or breeder.
The survey, conducted by the Associated Press and Petside.com, asked more than 1,100 pet owners where they were more likely to get their next pet from. Of the respondents, 54 percent said they would get their pet from an animal shelter or rescue center. Twenty-three percent said they would choose a breeder, and only 8 percent said they would go to a pet store.
Respondents also had a slightly more favorable view of the health of pets coming from animal shelters. Nearly half of the respondents (47 percent) said they were very concerned or extremely concerned about the health of a pet that came from a pet store. That’s compared with 38 percent who expressed an equivalent level of concern about breeders, and 32 percent who were equally concerned with the health of a shelter pet. 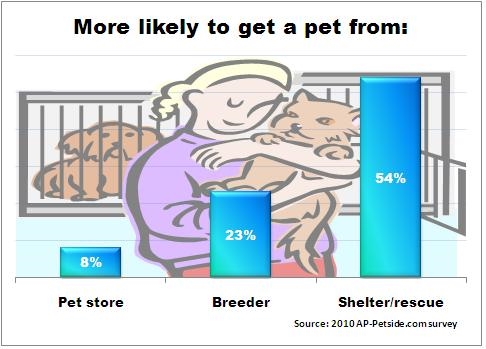 Pets trump vacation, date night
Another recent survey of pet owners found that 89 percent of pet owners in the United States would give up their vacation for a pet’s surgery, if the surgery would help the pet. Ninety-one percent said they would give up "date night" if necessary to pay for their pets medication.
This survey was conducted by the New York-based health care marketing company grey healthcare group. It found that at least two-thirds of pet owners in the United States and Europe turned to their veterinarian or veterinary assistant for information on their pet’s health. Fifty-nine percent said they would go to the Internet for information, and 33 percent said they would consult family or friends with pets.
Other findings from the survey included: