COVID-19 Update: AAHA staff is currently working remotely and will support our members virtually. All orders are currently shipping as normal.
Click here for more information.
AAHA Are you smarter than a specialist? Find out this May at Connexity AAHA publications NEWStat DVM applicants up in 2011

AAHA - 2/20/2011
Applications to U.S. veterinary schools are back up again, after a decrease in applications last year.

Over the past five years, the average increase in applications to veterinary schools has been just over 2% per year, according to data from the Association of American Veterinary Medical Colleges (AAVMC). Applications dipped slightly in 2010 compared to 2009, decreasing about 1 percent. But applications for 2011 are back on track, increasing about 2 percent.

Twenty-one was the age of most of the applicants (29%), and more than three-quarters are female (77%). The overwhelming majority are white and 97 percent are from the United States. 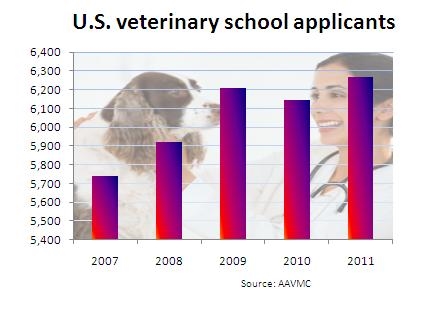 The Virginia-Maryland Regional College of Veterinary Medicine reported a large rise in applications for its incoming class. The school said in a news release that applications to its DVM program rose by 11 percent this year over last year, "a historic surge" for the program.

The college will enroll 95 incoming students this fall, it reported. Fifty of those students will be residents of Virginia, 30 from Maryland, and 15 from other states and countries.

Note: The AAVMC data does not include information from U.S. Veterinary Schools that dont participate in the Veterinary Medical College Admissions Service (VMCAS) system (Tufts, Tuskegee, Texas A&M) or applicants that apply directly to schools that are "partial" participants in VMCAS (University of Missouri).