When a glass is half-empty, it’s also half-full. So let’s fill it up.

That’s the outlook among veterinary leaders following disappointing news that the profession has made little progress – and some lost ground – since 2010, despite a concerted, widespread effort to promote companion animal preventive care.

Veterinary professionals are getting the message about preventive care, but it seems to be lost on pet owners, according to a report by Partners for Healthy Pets. The report, “Reverse the Decline in Veterinary Care Utilization: Progress Made, Challenges Remain,” was released at the American Veterinary Medical Association annual conference in Denver yesterday.

Julie Legred, CVT, executive director of the National Association of Veterinary Technicians in America and NAVC senior manager of veterinary technician programs, agrees, noting technicians’ role as leaders. “With the support of practice owners, technicians can be the vocal champions of leading practice efforts around preventive care,” she said.

The mixed messages result from Partners for Healthy Pets's analysis of two large-scale studies of veterinary professionals and pet owners. The analysis reveals a fundamental disconnect between professional efforts and pet owner uptake on preventive care.

In the first study, Partners for Healthy Pets surveyed veterinary professionals to gauge the effects of the organization’s four-year drive to improve preventive care. The group surveyed 1,117 practice team members (veterinarians, technicians, and office managers), 69 deans and faculty at schools of veterinary medicine, and 28 associate members of Partners for Healthy Pets, an industry group.

• More than 60 percent said that there has been an increased emphasis on preventive health care in their practices.

• More than 60 percent said that there has been an increased effort to communicate the value and benefit of preventive health care to pet owners.

• More than 70 percent said that they have made an increased effort to emphasize the importance of the annual checkup to pet owners instead of just recommending specific elements of disease prevention such as vaccination and heartworm prevention.

Future veterinarians are also getting the message. Deans and primary care faculty at North American veterinary schools were emphatic about the growing emphasis on the importance of preventive pet health care at their institutions:

• More than 90 percent of deans and 70 percent of faculty said that their clinics have placed increased emphasis on providing preventive health care to pet owners.

• More than 80 percent of deans and 90 percent of faculty said that their school uses or instructs their students on how to use the 2011 AAHA-AVMA Canine and Feline Preventive Healthcare Guidelines.

“We’ve seen a tremendous increase in the emphasis that the veterinary colleges are placing on preventive care," said Andrew T. Maccabe, DVM, MPH, JD, executive director of the Association of American Veterinary Medical Colleges. “This means that today’s graduates will have a stronger appreciation for the value of preventive care, and they will carry that with them throughout their careers.”

Today, despite the increased emphasis on preventive care, pet owners are less likely now than they were four years ago to bring their animal to the veterinarian.

The 2014 Update to the 2011 Bayer Veterinary Care Usage Study evaluated responses to an online survey of 1,100 dog and cat owners. Both the 2011 and 2014 study were conducted by Brakke Consulting, Inc., using the same methodology.

A key finding of the 2014 study was that there has been no reversal of the decline in pet owner visits to veterinarians within the past four years:

Cats continue to be an underserved population; in both 2011 and 2014, more than a third of cat owners said they did not visit a veterinarian within the past year.

Even worse, according to Partners for Healthy Pets, “One of the most troubling findings of the 2014 study was that pet owners are now willing to accept considerably longer intervals between visits to a veterinarian than in the past,” the report said.

“For example, dog owners in 2014 said that they were comfortable waiting an average of 16.9 months between visits versus the 11.4 month average interval indicated in the original study,” Partners for Healthy Pets reported.

There was no appreciable change in pet owners’ opinions of the value of regular visits to a veterinarian. Table 1 compares pet owner views of veterinary visits in 2011 and 2014. 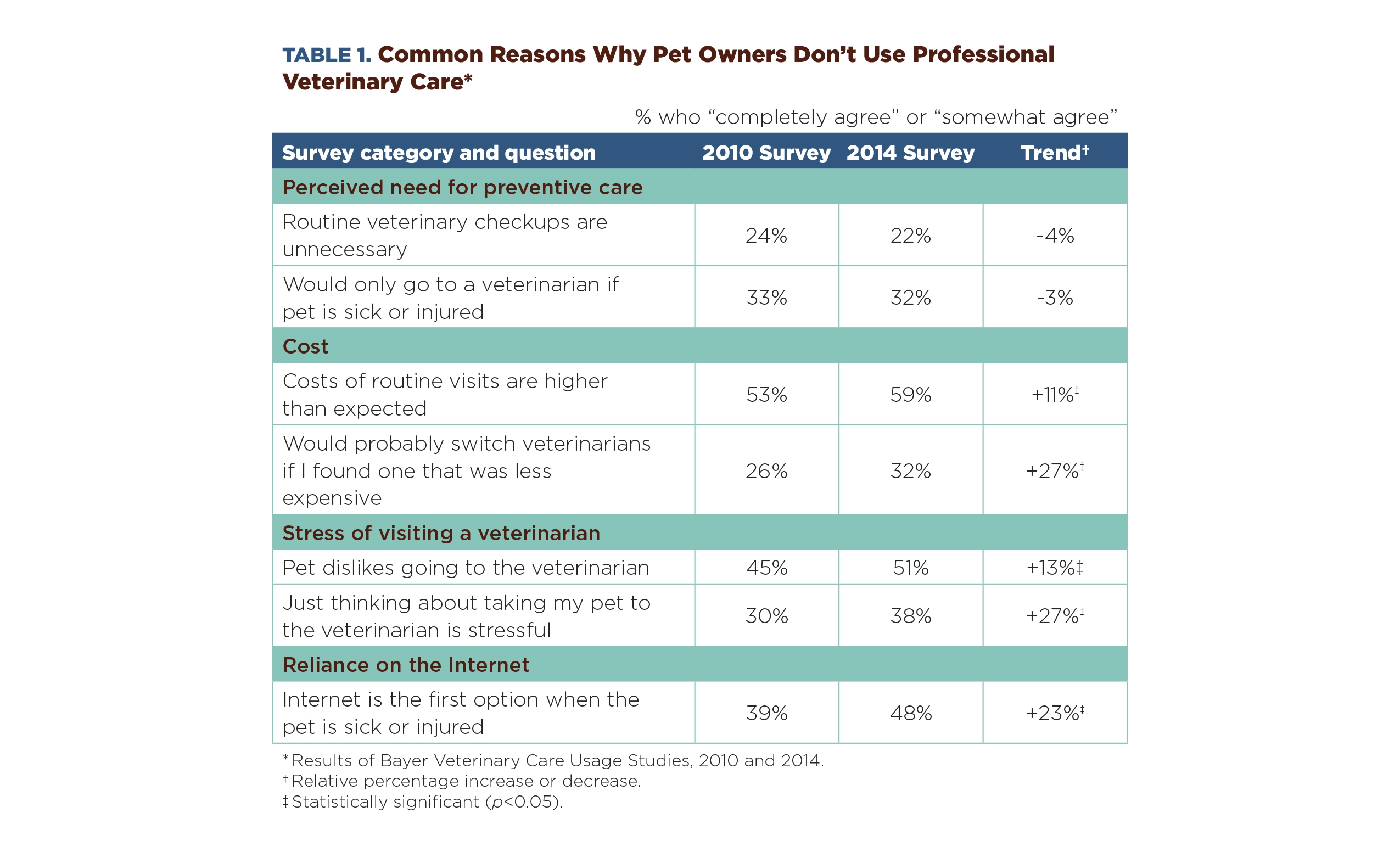 In light of the conflicting results, Partners for Healthy Pets takes the long view.

“Companion animal medicine is in the midst of a two-stage, evolutionary transition away from a transactional-based practice model focusing on vaccinations and acute care,” the “Reversing the Decline” report states. The first stage is building awareness and the capacity to change within the profession; the second stage is creating pet owner demand for preventive care.

“The history of fundamental change in health care tends to be incremental rather than abrupt,” Partners for Healthy Pets added.

Cavanaugh of AAHA agrees, but he’s not waiting for change to happen. With his signature phrase “What else can we do?” he challenges the veterinary profession to “be the change.”

“We have a huge opportunity here. Any change requires action, and the time for that action is now,” he said.

“Partners for Healthy Pets has created an environment where positive change can occur. Veterinarians and their practice teams are in the driver’s seat and best situated to communicate the value and importance of preventive veterinary care,” Cavanaugh said.

Editor's note: This article was updated to include a link to the white paper.