Due to an increase in recent call volume, wait times for inbound calls have been longer than usual.
Our members are very important to us as are their questions and inquiries.
We will get to your call as soon as we can; please email [email protected] at any time for additional assistance.
AAHA AAHA publications NEWStat Animal anti-vaccination movement gains attention 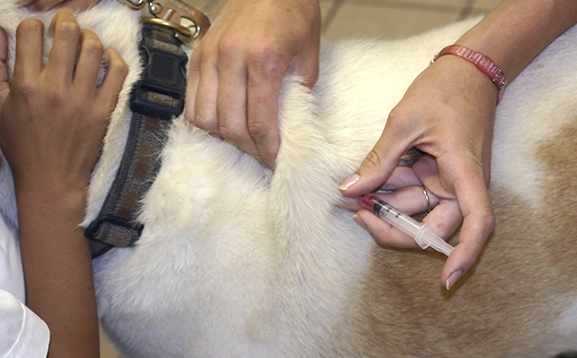 On Feb. 4, New York Magazine posted a story on the rise in the anti-vaccination movement in light of the measles outbreak. Brennen McKenzie, a veterinarian blogger and past president of the Evidence-Based Veterinary Medicine Association, told New York Magazine that he has seen an uptick in pet owners choosing to skip vaccinations for their pets against distemper and other ailments, such as parvovirus.

Popular Science, in its Feb. 4 post, picked up on this story, noting that there is no way to prove the size of this movement because there is no central U.S. agency that tracks cat and dog vaccinations. Often, the "unscientific fears" humans have about vaccinating their children are transferred to their pets.

The American Veterinary Medical Association (AVMA) responded to this media attention in its Feb. 6 post. The AVMA expressed concern that the trend to eradicate the domestic dog variant (strain) of rabies in the United States, and make diseases like distemper, parvo and panleukopenia less common, could easily be reversed in the same way that measles is regaining a foothold.

AVMA also named the larger conversation that was occurring—a philosophical difference in how an owner should care for her pet—and urged pet owners to base their decisions about vaccinations on science rather than ideology.

Michael Cavanaugh, DVM, DABVP, and chief executive officer of AAHA, commented on the potential outcome of the anti-vaccine movement. "I was in Chicago last week and the measles outbreak there was a key topic on every news program I saw," Cavanaugh said. "It is disheartening to me that people are not vaccinating their kids or their pets against easily preventable diseases. Those of us old enough to remember what distemper, parvovirus and panleukopenia do to a population of unvaccinated pets hope to never see that again.

"Unfortunately, if enough people choose not to vaccinate their pets, we’ll see such outbreaks again, just as we’re seeing measles outbreaks following the trend of parents not vaccinating their kids," said Cavanaugh. "People need to listen to the experts on these matters and not believe what they might be reading on the internet or hearing from a friend."