COVID-19 Update: AAHA staff is currently working remotely and will support our members virtually. All orders are currently shipping as normal.
Click here for more information.
AAHA Are you smarter than a specialist? Find out this May at Connexity AAHA publications NEWStat DOT report issued on animal injuries and fatalities on airlines in 2014 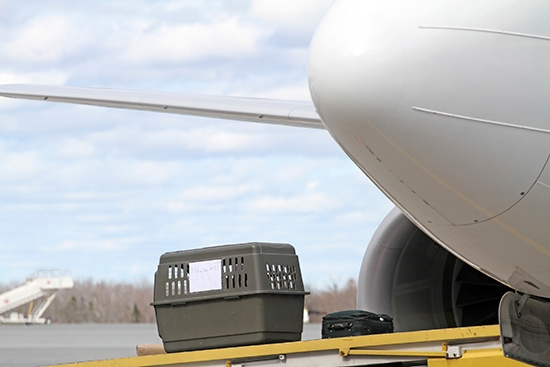 "Many years ago, I traveled with my puppy. Because she weighed too much, I had to use cargo. [After the flight, she] demonstrated PTSD-like symptoms…. It has been almost 7 years and she has never completely recovered," wrote Michelle Tinkham.

"We have helped [pet] owners send their best friends all over the world for 35 years, and no owner has come back to say their pet was injured, killed or lost," wrote Cambridge Veterinary Care.

These are only two of the stories AAHA’s Facebook readers shared when asked about their experiences traveling on airlines with their pets. Yet despite the mixed reviews, animal fatalities and injuries on U.S. airlines are a reality.

On Feb. 10, the U.S. Department of Transportation (DOT) issued its 2014 figures, and reported 17 animal fatalities and 26 injuries. United Airlines topped the list, with five deaths and 13 injuries.

Most of the injuries involved dogs and cats who tried to escape from their cages and were bloodied and hurt in the process. Animal deaths occurred when animals were hit by vehicles after escaping from transport cages at the airport, or as a result of the stress of travel which aggravated underlying health issues, according to Bloomberg Business.

It’s difficult to say which airline has the best or worst record. United had the most animal deaths and injuries in 2014, but given the number of departures (500,000), that is proportionately lower than Alaska Airlines. The number of airline miles traveled per departure must also be factored into the equation.

While it’s unclear which airline is best for animal travel, veterinarians can help their clients understand safe rules for pet air travel in cargo. According to the AVMA, most airlines require a Certificate of Veterinary Inspection (health certificate) issued within 10 days of travel. Veterinarians can also write an Acclimation Certificate that will waive the low temperature Federal regulation as dictated by the Animal Welfare Act.

Of course, pet owners could also choose to travel by train and take their pets.

At least, that’s what Republican congressman Jeff Denham of California, a pet owner who oversees the agencies that regulate the nation’s railroad industry, is set on doing.

Denham persuaded Amtrak to conduct a Carry-On Pet Pilot Program last year. One hundred forty-five passengers signed up, and participation continues to grow, The Detroit News reported. Denham has now filed a bill that would require Amtrak to have a pet policy, and 24 lawmakers have signed onto the legislation.

Despite Denham's enthusiasm, Amtrak is cautious. "We’re going at this very carefully, because there are people who want this, and people who are concerned about how it could affect them," Marc Magliari, a spokesman for Amtrak, told The Detroit News.