Wild cats had a negative impact on ancient dog species 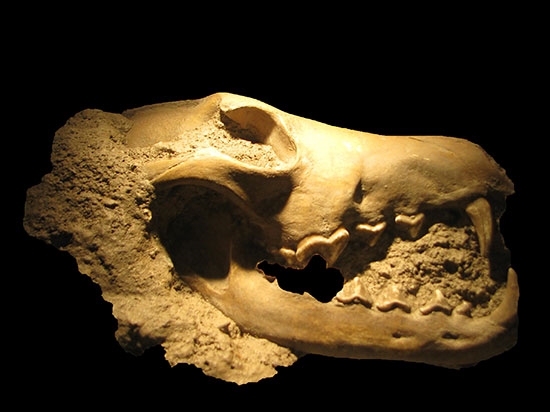 Above is one of the fossils canids reviewed in the study.

Are cats more skilled at getting what they want than dogs? A new study suggests that at least in ancient times, that may have been true.

Researchers from the Universities of Gothenburg (Sweden), São Paulo (Brazil) and Lausanne (Switzerland) studied over 2000 North American fossils and concluded that felids (wild cats) who migrated from Asia into North America spelled doom on the diversity of the dog family. They contributed to the extinction of up to 40 dog species.

The findings were published in the Proceedings of the National Academy of Sciences (PNAS) on May 30.

“We usually expect climate changes to play an overwhelming role in the evolution of biodiversity. Instead, competition among different carnivore species proved to be even more important for canids,” said Daniele Silvestro, PhD, Department of Biological and Environmental Sciences, University of Gothenburg, and lead author of the study.

The survival of carnivorous animals is linked to the ability to obtain food. With limited prey in a geographic area, competition for that prey, logically, increases.

While felids impacted ancient dogs, the researchers did not find the reverse to be true, suggesting that felids may have been more skilled predators.