AAHA offices are closed due to a special staff function from 1-5pm MDT on June 24. We will resume regular business hours on Monday, June 27.
AAHA AAHA publications NEWStat® Dogs recognize emotions in humans and dogs 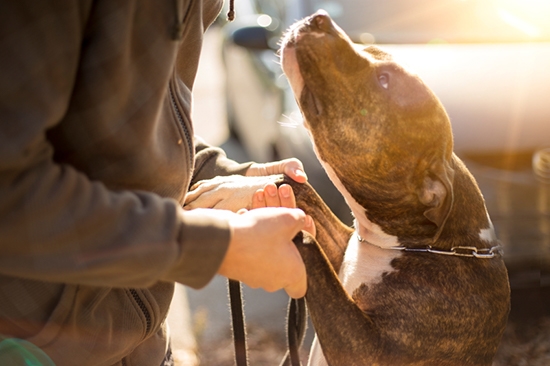 If your clients tell you their dogs can "read" their emotions, guess what? They may be right, a new study suggests.

Animal behaviorists and psychologists at the University of Lincoln in the United Kingdom and the University of Sao Paulo in Brazil concluded that dogs, using bimodal sensory emotional information, can discern between positive and negative emotions from both humans and dogs.

The study was published on Jan. 13 in The Royal Society journal Biology Letters.

The researchers presented 17 domestic dogs with pairings of images and sounds conveying different combinations of positive (happy or playful) and negative (angry or aggressive) emotional expressions in humans and dogs. These distinct sources of sensory input—photos of facial expressions and audio clips of vocalizations (voices or barks) from unfamiliar subjects—were played simultaneously to the animals, without any prior training.

The team found the dogs spent significantly longer looking at the facial expressions that matched the emotional state (or valence) of the vocalization, for both human and canine subjects.

The integration of different types of sensory information in this way indicates that dogs have mental representations of positive and negative emotional states of others.

“Our study shows that dogs have the ability to integrate two different sources of sensory information into a coherent perception of emotion in both humans and dogs,” said researcher Kun Guo, PhD, from the University of Lincoln’s School of Psychology. “To do so requires a system of internal categorization of emotional states. This cognitive ability has until now only been evidenced in primates and the capacity to do this across species only seen in humans.”