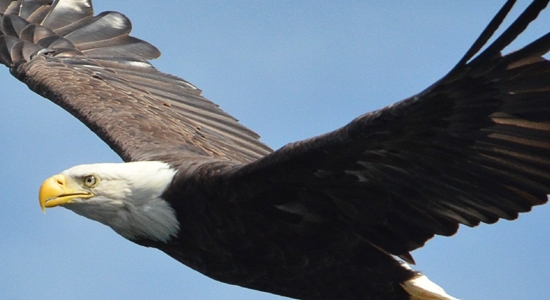 The bald eagle has a wingspan of about six and a half feet and can live 20 to 30 years, according to the National Wildlife Federation. In the wild, bald eagles face multiple threats, including, at least for one bald eagle, human predators. Luckily for this one, there was help.

On May 5, an injured female bald eagle from southern Illinois successfully underwent reconstructive wing surgery at the University of Illinois Veterinary Teaching Hospital and its Wildlife Medical Clinic. The wing had healed improperly on its own after being fractured by a gunshot.

Updates on the patient’s progress, as well as surgery images and x-rays, are available on the University of Illinois Veterinary Teaching Hospital website.

The surgery involved breaking down the bony callus that had formed at the fracture. After the bony callus was removed, the bone ends were freed from the surrounding tissue and then aligned.  Then cerclage wire and an orthopedic plate were applied to stabilize the bone in its correct position.