Sleep could enhance learning in dogs 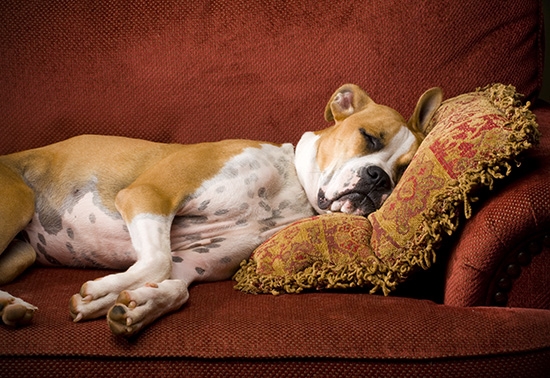 Let sleeping dogs lie—they might be reviewing what they learned in their sleep.

Researchers in Hungary conducted a study to non-invasively test the function of sleep in dogs in a way that is directly comparable to human sleep studies. The researchers believed dogs were a relevant choice “due their human-analogue social skills and their approximately 18–32 thousand years of domestication history, during which they have adapted in evolutionary terms to the same environmental challenges as humans.” The study was published online in the February 2017 Scientific Reports.

The idea behind the research was to see if sleep could help with memory consolidation, a process where the brain packages information into a memory. To test this, researchers conducted two experiments with companion dogs.

After each condition, each dog’s sleep EEG was monitored for three hours. After the sleep, the dogs’ performance significantly increased compared to the pre-sleep baseline. Evidence suggested a correlation between performance improvement and relative EEG spectrum power—decreased REM sleep delta activity and increased beta activity were related to higher performance.

For the first experiment, the researchers stated, “results suggest that command learning in dogs influences both REM and non-REM sleep.” After demonstrating learning-induced changes in the sleep EEG spectrum, researchers conducted a second experiment to determine how post-learning activities affect memory consolidation.

In the second experiment, 53 dogs participated in the command learning—being told to sit and lie down in English—and then divided into four post-learning groups: sleeping, walking, playing with a toy, or more learning.

The dogs were tested again after an hour. The dogs who slept and walked saw an improvement, although the researchers noted the difference between post-sleep retest and the baseline were not significant. The dogs were sent home and came back after one week. In those results, the dogs in the sleep group had improved, as had the dogs in the walking and playing with a toy group.

The study concluded that the results, “provide the first evidence of the interrelated effect of sleep and learning in dogs, suggesting that a sleep-dependent memory consolidation takes place in this species.” They recommend further studies to test if dogs are subject to individual variation in sleep and memory like humans.