Due to an increase in recent call volume, wait times for inbound calls have been longer than usual.
Our members are very important to us as are their questions and inquiries.
We will get to your call as soon as we can; please email [email protected] at any time for additional assistance.
AAHA AAHA publications NEWStat Dogs and people share social intelligence skills 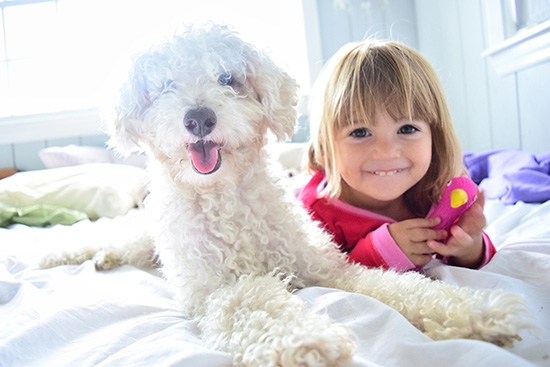 Humans may have more in common with dogs than their closest relative—the chimpanzee.

In a study headed by Evan MacLean, director of the Arizona Canine Cognition Center at the University of Arizona, dogs and two-year-old children showed similar patterns in social intelligence, much more than between human children and chimpanzees. The research will be published in the April 2017 issue of Animal Behaviour.

The study tested 552 dogs, including pet dogs, assistance-dogs-in-training, and military explosive detection dogs across a variety of breeds. This allowed researchers to look at dogs from diverse backgrounds. Social cognition was assessed through game-based tests like hiding treats and then pointing or looking at the hiding places.

While chimpanzees performed well on tests involving their physical environment and spatial reasoning, dogs and children outperformed them on cooperative communication tasks.

In a press release from the University of Arizona, MacLean said these findings could help scientists better understand how humans evolved socially: "Our working hypothesis is that dogs and humans probably evolved some of these skills as a result of similar evolutionary processes, so probably some things that happened in human evolution were very similar to processes that happened in dog domestication."

One possibility is that through the evolution process, dogs and humans received more benefits and rewards for more cooperative behavior. Future studies can look to whether dogs and humans shared similar evolutionary processes and whether this social intelligence developed from similar circumstances.