COVID-19 Update: AAHA staff is currently working remotely and will support our members virtually. All orders are currently shipping as normal.
Click here for more information.
AAHA Are you smarter than a specialist? Find out this May at Connexity AAHA publications NEWStat Children with pets could be at less risk of allergies and obesity 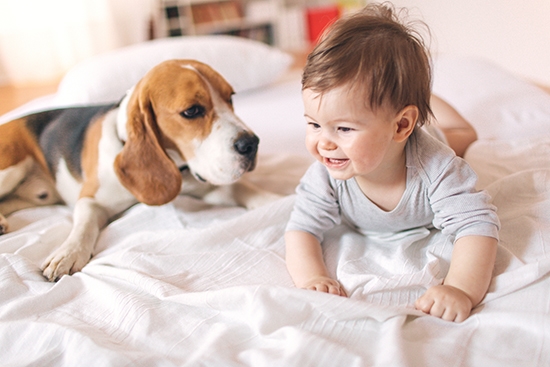 Exposure to household pets from birth could reduce a child’s risk for allergies and obesity.

A study conducted by researchers from the University of Alberta looked at infant gut microbiota to see whether pre- or postnatal pet exposure would have a significant effect. The results were published in the April 2017 issue of Microbiome.

More than half the infants had some exposure to pets—8% were exposed in pregnancy alone and 46.8% had exposure during both time periods.

Pre- and postnatal pet exposure enriched the abundance of Oscillospira and/or Ruminococcus. Both bacteria are a little tricky to pin down in terms of benefits to infant health. Oscillospira has been detected in rRNA gene surveys of the human microbiome and been associated with “with leanness or lower body mass index in both infants and adults.” As for the role of ruminococcin, they are fiber degraders and typically predominant in formula-fed infants. In a previous study, researchers “observed a strong link between low levels of Ruminococcaceae and food sensitization at age 1, even after adjustment for major microbiota-disrupting events.” This suggests that infants with high levels of Oscillospira and Ruminococcus would be at a lower risk for allergies and obesity.

Some of the benefits of pet exposure applied to infants who had prenatal exposure but not postnatal exposure, indicating that the microbiome exchange could take place before birth. The researchers concluded that further research is needed to link the microbiota changes with the health outcomes of infants in this study as well as children in other cohorts.