An increasing concern for feline hyperthyroidism 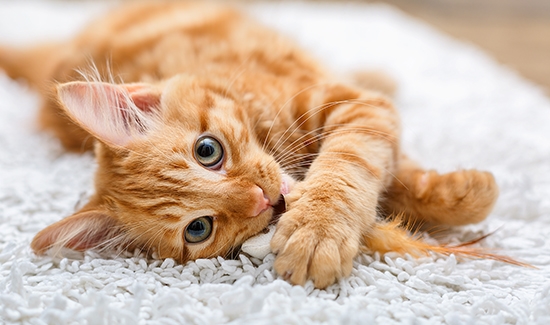 Feline hyperthyroidism has become a growing cause for concern and research in the veterinary field.

A study published in the February 2017 issue of Environmental Science and Technology found that use of chemical retardants in household objects showed up in dust around the home, meaning cats face a significant exposure to the chemicals. The study focused on brominated flame retardants (BFRs) used to fire-protect indoor decorations, furniture, electronics, and electrical appliances. One major class of BFRs are polybrominated diphenyl ethers (PBDEs), which are not chemically bound to the material and so tend to migrate into the household environment. By testing household dust and the blood of housecats, the study showed a correlation between the two, suggesting that high levels of BFRs in dust puts cats at risk.

These results, which showed higher serum concentrations in cats for BDE-99, BDE-153, and BDE-183, relate to a study from 2015 that determined that those higher concentrations could lead to hyperthyroidism in cats.

A study of California housecats published in early 2016 tested the serum PBDE levels in cats from 2008–2010 and 2012–2013 as well as levels in houses after a ban of chemicals in the state. They found that PBDE levels were decreasing in households but not disappeared completely. Further testing showed that elevated PBDE levels were more prevalent in cats with hyperthyroidism.

The New York Times Magazine recently reported on this increase of feline hyperthyroidism cases and what it could mean for people. If cats are developing this disease as a result of household chemicals, could that be an indicator that people are also at risk? The results are still inconclusive on all ends—maybe cats with hyperthyroidism have higher PBDE levels as a result of the disease rather than those levels acting as the cause.

Some more recent advances in treatment of feline hyperthyroidism include clinical trials by researchers at the Virginia-Maryland College of Veterinary Medicine that look at the severity of the hyperthyroidism before deciding on a dose of radioiodine. The concern is that giving all cats a fixed dose could mean some being overdosed and some are not receiving enough radioiodine. The researchers want to develop objective criteria to determine the dose of radioiodine that achieves the best treatment responses.

While feline hyperthyroidism has become much more prevalent than decades ago, the continued effort to pinpoint the cause and treatment should benefit all pets and pet owners in the years to come.

NEWStat Advancements & research Veterinary trends News You and Your Vet