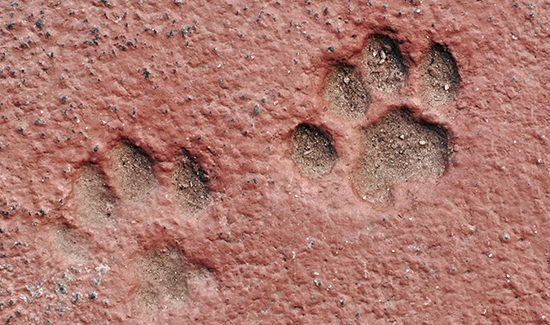 Cats were leaving their mark in the ancient world.

Researchers from Network Archaeology recently found a 2,000-year-old roof tile with a cat print preserved on it. A new highway is being built outside the city of Lincoln in England, and the researchers are making sure to preserve cultural materials along the route of the newly planned highway.

Most Roman-era buildings were made of wood and thatch, but the newly discovered print was found in a tile crafted of red clay set on a building of stone and brick, meaning it likely belonged to wealthier class of Romans.

Marks left by other animals have been found at the site including dog prints. However, cat prints are rarer.

While there are plenty of records that ancient Romans loved their dogs, there is less evidence of domestic cats. However, there is some art that depicts people holding cats and mosaics featuring cats pouncing on birds. You can see a small gallery featuring a few mosaics with cats here.

According to research done by Francis D. Lazenby, there are mentions in Plutarch at the end of the first century CE of the cat and weasel as house animals. Pliny also talked about housecats, mentioning that they could drive away mice. Despite these mentions of cats, it seems they were rarely kept as pets and not commonly domesticated in Roman homes. The cat print found on the roof in Lincoln could be from a housecat or a wild cat wandering through.

In 2015, a set of cat prints was found on Roman roof tile in Gloucester that dated back to about 100 A.D. And in 2013, a 15th century manuscript was found with some errant cat prints across the pages.

This means the phenomenon of your cat entering random characters into your typed documents is nothing new. They’ve been adding their own brand to human work for quite a while.