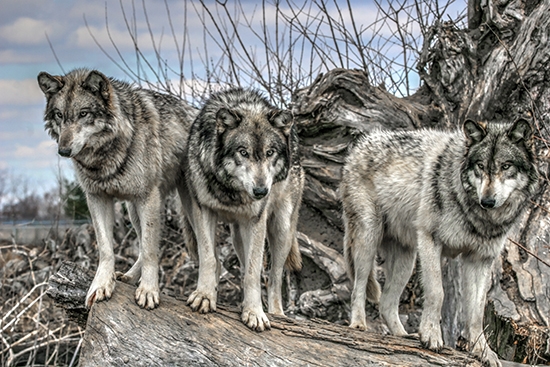 Dogs have a concept of fairness, but they probably didn’t get it from people.

Having a concept of fairness and equity is thought of as a human trait, but it might not be as exclusive to humans as previously thought. People have long believed that the fact that dogs seem to share a sense of fairness with us was probably a result of selective domestication—dogs that behaved more fairly could have been kept nearby for further breeding.

However, new research from the University of Vienna shows that wolves also have a sense of equity. This suggests dogs likely developed the concept of fairness from their ancestors and not from people. The study was published in the journal Current Biology in June 2017.

Researchers tested similarly raised dogs and wolves that lived in packs. While the dogs had been socialized with people, they were not in pet-owner relationships.

Dogs and wolves were put in adjoining cages and then instructed to press a buzzer. This could result into two different outcomes as reported by the Independent, a British newspaper. In the no-reward test, the partner got a treat in every trial, while the dog or wolf who pressed the button got nothing. In the quality test, both animals got a reward, but the higher quality treat was given to the partner.

If the dog or wolf pressing the buzzer moved away from it and refused to respond to commands of “press” or “come,” the session ended.

Both dogs and wolves refused to continue participating in the experiment once they realized the inequity occurring.

When not paired with a partner, the test animal was more willing to continue pressing the buzzer for no reward, suggesting that they did not refuse to participate because they received no treat, but because the test was unfair.

Because the dogs in this study were not pets, the researchers that studies using pet dogs could be confounded due to dogs’ relationships with humans: “Life-long positive interactions and training with their human caregivers might prevent dogs from refusing to continue to participate in the experiment due to their willingness to please the human experimenter.”