Due to an increase in recent call volume, wait times for inbound calls have been longer than usual.
Our members are very important to us as are their questions and inquiries.
We will get to your call as soon as we can; please email [email protected] at any time for additional assistance.
AAHA AAHA publications NEWStat Why midsized animals are faster than their larger counterparts

Why midsized animals are faster than their larger counterparts 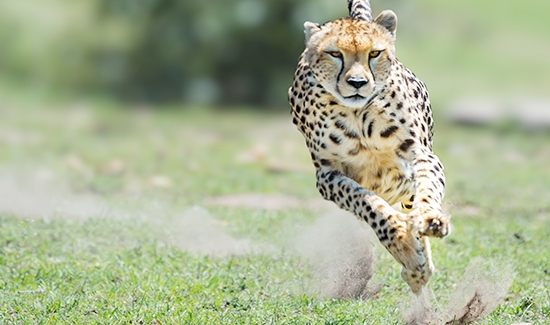 In theory, the bigger an animal is, the faster it should be able to travel. However, observations of different animals have shown this not the case. Researchers have been trying to provide answers as to why and a new study suggests it has to do with muscle fibers and energy.

Published online in July 2017’s Nature Ecology and Evolution, the study looks at 474 species of animals, ranging from mammals to birds to fish. Previous studies have focused on certain groups of animals, like only studying mammals, but that limitation can also limit the size range of animals studied.

In this study, researchers looked at the very tiny—think southern hawker dragonflies—and the very large—African bush elephants. By taking these species and mapping their top recorded speeds onto graphs, researchers got an inverted U-shape, with midsized animals at the top.

Animals of the same size do not necessarily all move at the same speed. Through mapping speeds, the researchers found that flying animals are nearly six times as fast as running ones. For swimming animals, small aquatic animals are slower than running animals of the same body mass. The larger swimming animals get, the closer they get to matching the speeds of their running equivalents. This has to do with the density of water versus air, making body mass in the water a better benefit to moving faster.

What accounts for the result that animals start slowing down again once they reach a certain size? The researchers in this study concluded that the number of “fast twitch” muscle fiber cells and how long it takes those cells to run out of energy plays a role. In large animals, like elephants, those muscles run out of fuel before the elephants can reach the faster speeds of smaller animals.

Using the information, they learned from their models, the researchers applied a graph to dinosaurs. If dinosaurs follow the same model, then a Tyrannosaurus Rex would run about 27 kilometers per hours (or a little more than 16.5 miles an hour). This clocks in much slower than the predicted top speeds for a Velociraptor (54.56 km/hour or 33.86 miles/hour), but is still faster than the average human can run.