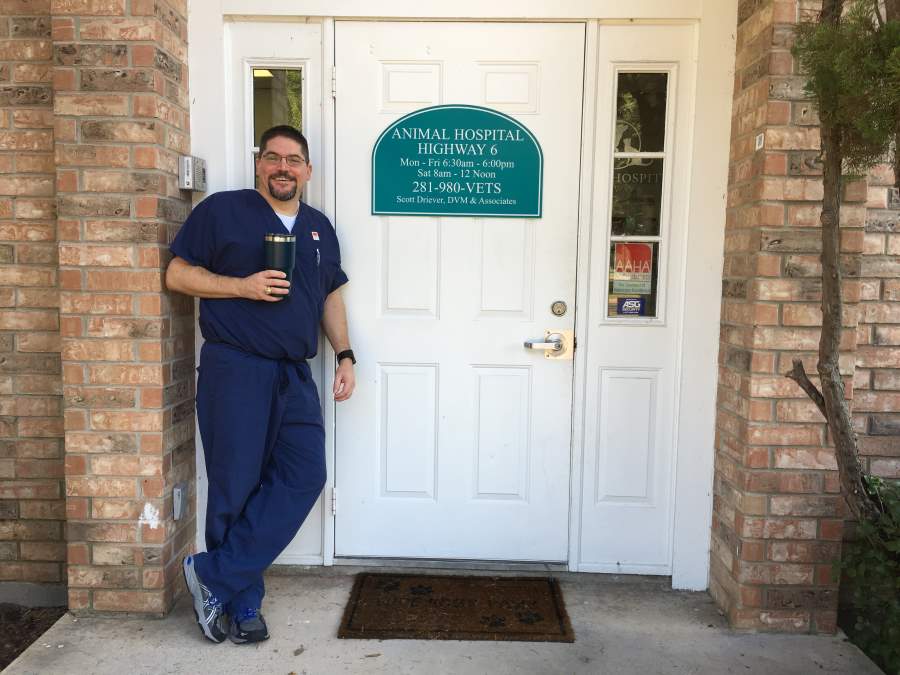 Veterinary practices are braving the floods in Texas and Louisiana—and bracing for even more—as Harvey’s rain and floods continue. Some practices have lost everything to wind or rain; others have seen doctors stranded and working 24/7 for days on end. Emergency hospitals are slammed, but one emergency practice reported that the patients are not victims of the floodwaters per se, for example exposure or water inhalation. Instead, they are seeing emergencies like ingestion of foreign bodies. 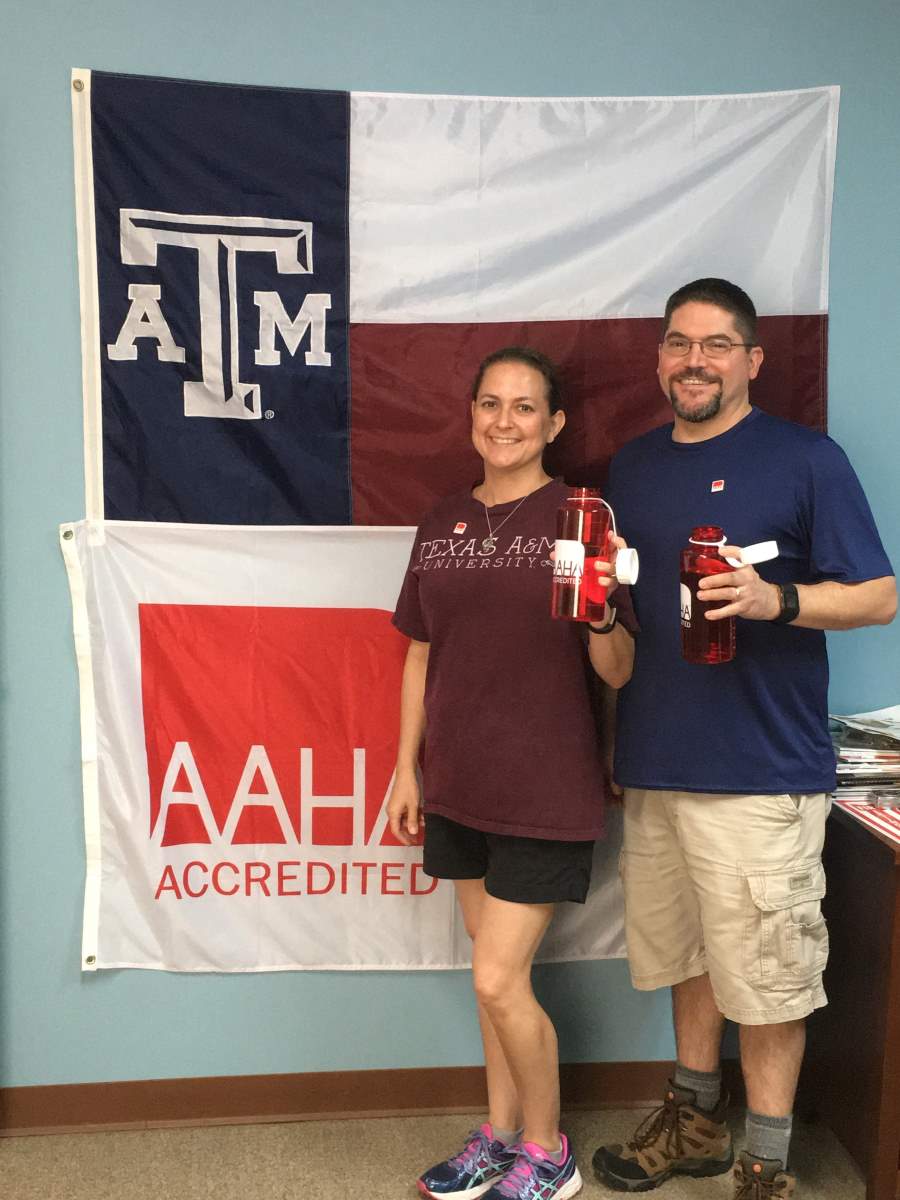 With conditions varying across the huge area affected by Harvey, practices are making do.

One veterinarian moved his family into the practice.

Scott Driever, DVM, owner of AAHA-accredited Animal Hospital Highway 6, moved his family into his practice after the Colony Lakes neighborhood was ordered to evacuate within 24 hours.

Scott and his wife, Susan, their two sons, and Scott’s father are camping out in the breakroom—and the doctor’s office and the breezeway.

The family is well supplied with food, camping gear, and importantly, cots and mattresses for all. Everyone takes turns sleeping in the better beds.

With 24-hour notice and flood waters not reaching their house, the family had plenty of time to move. “It’s not like we ran out with just the shirts on our backs,” Driever said.

In his area, the rainfall and flooding ebbed and flowed, as rain fell in a rhythm of two hours on, four hours off.

Houston is designed to accommodate massive flooding, Driever said. The sports fields flooded first, then roads, and finally, buildings. So, even though Harvey’s flooding exceeds the flood-control measures, Houston’s layout helps to mitigate the damage. While Driever’s staff is safe, he said, they have been unable to navigate the roads to reach the practice. 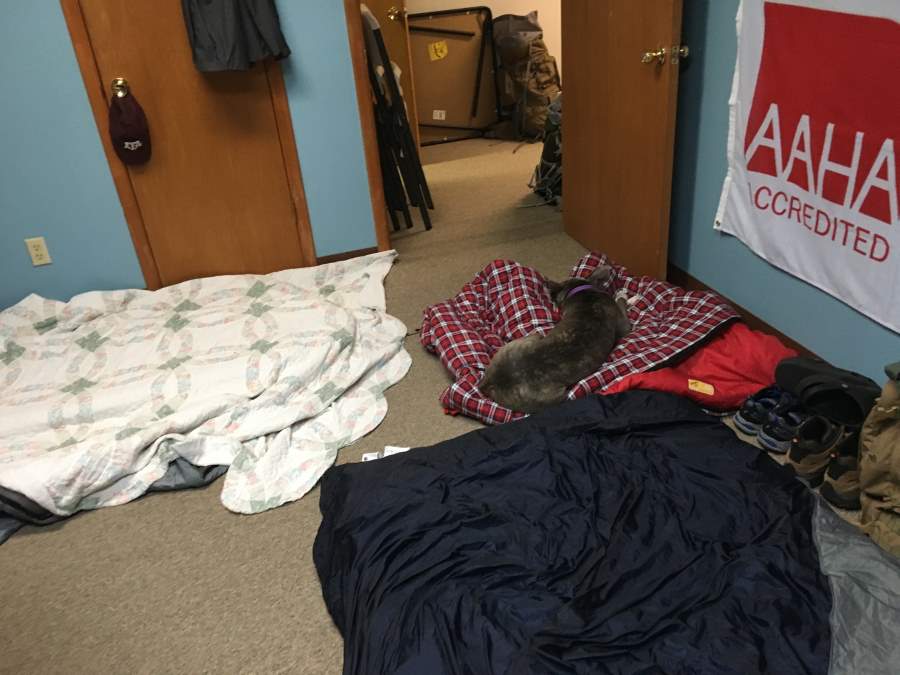 Still, clients continue to come in. The practice has been operating with a skeleton crew, providing necessities such as food, pharmaceuticals, and recheck visits. Driever expects to be up to 75% of full strength today.

While Driever resumes his practice, he’s keeping an eye on the weather. “There’s a lot of uncertainty,” he said on Wednesday afternoon. “My home and practice are safe for now. I have blue skies, it’s a beautiful day.”

But he can’t rest comfortably until after the Brazos River crests on Thursday. The National Oceanic and Atmospheric Administration predicts that the river will crest at about 56 feet at 1 p.m. this afternoon and remain at that level until Saturday. Some estimate the river may crest at ten times its normal level.

Harvey joins Katrina and Andrew in the lineup of devastating hurricanes to hit the United States in the past decades. Driever says the lessons learned from previous disasters—and the change in policy following Katrina to allow people to shelter with their pets—has helped to mitigate animal deaths.

In contrast to the Drievers’ experience, several hospitals have suffered devastating losses. NEWStat and Trends will share some stories of loss and comeback over the next months.

Meanwhile, AAHA extends its sympathy and appreciation to all of the veterinary practices that are struggling to survive and help one another through the crisis. “We know this is a difficult time for you, your practice team, clients, and patients,” said Michael Cavanaugh, DVM, DABVP (Emeritus). “Please know that the entire team at AAHA is thinking about you. . . . Our hearts are with you during this trying time.

“We commend you and your teams for your dedication and determination in the face of this terrible storm,” he added.

For AAHA members: Our team is here to support you. Should you have concerns we can help with, please contact us at [email protected] or 800-883-6301.