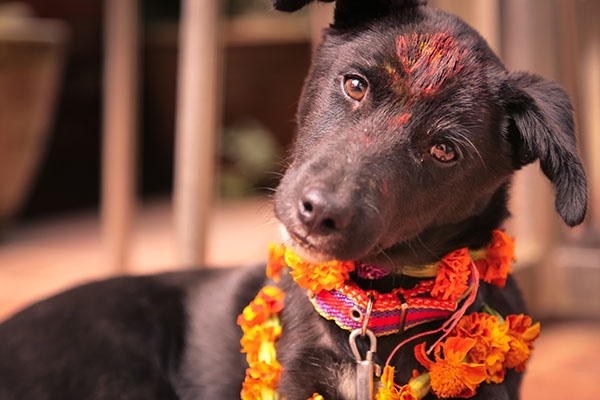 Some people love their dogs. The Nepalese worship theirs.

At least, they do during Diwali.

Diwali, known as Tihar in Nepal, is the Hindu festival of lights. The annual five-day spiritual observance kicked off yesterday and celebrates the victory of light over darkness, good over evil, hope over despair.

Each day of Tihar celebrates a different idea or entity. Day two (which is today) is called Kukur Tihar and honors the cherished relationship between humans and dogs. Today, the Nepalese drape dogs with flower garlands called mallas, and apply a red dot called a tika to their foreheads. Made of powdered red turmeric, the tika marks the dog as an object of devotion, grants him an aura of sacredness, and acts as a blessing on all those who encounter him during the festival.

The dogs make out like bandits, pets and strays alike.

Treats are a big part of the celebration, and can include milk, eggs, meat, or high-quality dog food. Some people even offer their dogs something called sel roti, a deep-fried treat similar to a donut.

Because dogs play an important role in Nepalese Hinduism and mythology. They pop up in some of Hinduism’s oldest texts and traditions. In one text, the Rig Veda, a dog named Samara, called the mother of dogs, helps the ruler of heaven reclaim cattle stolen by demons. In other texts, a dog serves as the faithful guardian of the god Yama, ruler of the dead (in one epic text, the Mahabharata, a dog reveals himself to be Yama).

Every dog has its day, and for dogs in Nepal, that day is today.

They better enjoy it while they can—tomorrow is Gai Tihar, which means worship of the cow—so you know whose turn it is next.