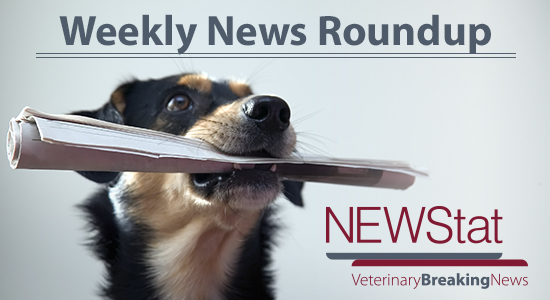 A California teen is facing a felony animal cruelty charge after police caught wind of a video that shows him hurling a cat into a body of water. 19-year-old Garratt Haile, a high school senior, was arrested February 2 after the year-old video re-surfaced and went viral. Police tweeted after the arrest that “The injured cat is at a veterinarian hospital being looked after and is in good condition.” Authorities credit social media with allowing them to apprehend Haile.

Researchers at the University of Veterinary Medicine in Vienna discovered that teaching senior dogs to play video games on a touch screen might stave off cognitive decline. The scientists found that brain training and problem solving can slow the pace of brain deterioration. But unlike puppies or young dogs, the researchers say, “old dogs are almost never trained or challenged mentally.” The study compares computer games for elderly dogs to elderly humans doing sudoku or crossword puzzles.

A new survey by Microsoft shows that new digital technology can make businesses less productive. Possible reasons for this include: workers who are too distracted by a constant influx of e-mails, Slack messages, Tello notifications, tests, tweets, and “viral cat videos.” Microsoft isn’t saying that technology dampens productivity in all cases, but that tech’s impact depends on the culture of the individual business. Those with a “strong digital culture” saw productivity gains from technology while those what Microsoft termed a “weak digital culture” didn’t. Proper training makes the difference.

At Fido’s Taproom, both dogs and beer are on tap. On one side of the space, Fido’s has 40 beers on tap, the walls are plastered with pictures of dogs, and dog videos play on the TVs. And there’s not a single beer sign to seen.  But across the patio from the taproom, there’s a little play area that’s home to six puppies, all of which are up for adoption. After expenses, Fido’s donates 25% of profits to local animal charities. Owner Scott Porter says customers are welcome to play with dogs, but they have to leave their beer and pub grub in the taproom. “The food would make the dogs go crazy,” Porte says. “And I really don’t’ want to deal with broken glass.”