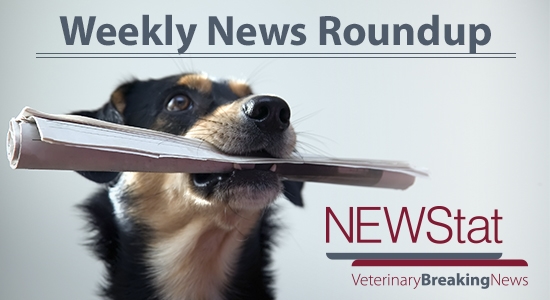 For decades, students across the country have offered up the classic excuse, “The dog ate my homework.” But now, a letter carrier in Smithfield, Virginia, is saying, “Dogs ate my lunch.” And the story that unfolded has amused thousands of people on social media. In June, Carol Jordan, who owns a five-acre farm in Isle of Wight, Virginia, stopped at her mailbox and discovered a handwritten note from the woman who delivers her family’s mail. “Our immediate thought was, ‘What did the boys do now?’” she told CBS News.

A controversial South Korean laboratory has successfully cloned the world’s smallest living dog 49 times for a commercial breeder. Miracle Milly, a six-year-old Chihuahua, weighed less than an ounce when she was born and could fit in a teaspoon. The tiny pet, who entered the record books in 2013 and weighs just over a pound, is the smallest dog living in terms of height, standing at just 3.8 inches tall. She was cloned at the Sooam Biotech Research Foundation in Seoul in August of last year. The company reportedly charges $100,000 to clone an animal. Currently, Milly lives with her owner, Vanessa Semler, in Florida, along with 12 of her 49 clones.

Cabin crew use oxygen mask to save hyperventilating dog midflight

Plane passengers rarely describe air travel as a breath of fresh air, but it was literally that for one family’s bulldog on a recent JetBlue flight. The French bulldog, named Darcy, was on a flight from Florida to Massachusetts on Thursday when she started showing signs of distress, according to her owner Michele Burt. The three-year-old bulldog’s tongue began to turn blue and she was having difficulty breathing. “We all are affected by cabin pressure and oxygen fluctuations, human, canine, and feline, etc., but the fact that the attendants were responsive and attentive to the situation may have saved Darcy’s life,” Burt wrote on her Facebook page.

Rural areas around the state of Texas are facing shortages of veterinarians as fewer young graduates want to practice away from urban amenities. In 2016, there were only about 180 veterinarians working on livestock in rural Texas areas. Texas Tech University hopes to remedy that problem by opening its own veterinary school in Amarillo, in the middle of the Panhandle. It would be the second veterinary school in the state. But Texas A&M University, which operates the only veterinary school in Texas, in College Station, and already sends veterinary students to study minutes away from where Texas Tech hopes to build its new program, is less than enthused. “It is completely redundant,” said Eleanor Green, dean of the Texas A&M College of Veterinary Medicine.

Did you buy that dog, or just lease it? Better check your paperwork

Most people understand what it means to lease a car. You make monthly payments in exchange for driving it, but you don’t actually own it. At the end of the lease, unless you make a big balloon payment, you have to give the car back. Now imagine finding out that you’re leasing your dog. Pet leasing is a growing trend, and it’s completely unregulated in most states. Now, some Houston, Texas–area pet stores have been accused of misleading customers who wanted to buy a pet by having them sign a lease instead. The customers used their smartphones to sign what they thought was a financing agreement, took their new pets home, and didn’t find out that they don’t actually own the pets until a hardcopy of the lease arrived in the mail.