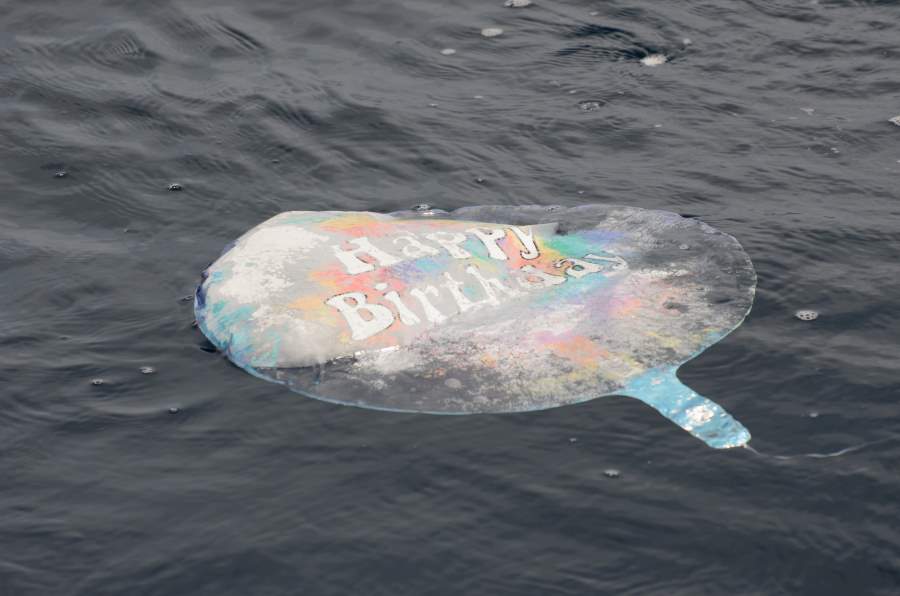 If we want to save seabirds, banning plastic straws alone won’t cut it. We need to ban plastic balloons.

A recent study of more than 1,700 dead seabirds showed that the deaths of more than 25% were linked to eating plastic. Of those deaths, 20% died after ingesting soft plastic debris such as balloons, even though soft debris made up only 5% of the inedible trash in the birds’ stomachs.

Seabirds frequently divebomb soft debris floating on the water because it looks like food.

Once swallowed, soft debris can obstruct their guts, leading to starvation. And if a seabird swallows a balloon, it’s 32 times more likely to die than if it had scarfed down a piece of hard plastic.

“Among the birds we studied, the leading cause of death was blockage of the gastrointestinal tract, followed by infections or other complications caused by gastrointestinal obstructions,” said lead study author Lauren Roman, a doctoral candidate with the Institute for Marine and Antarctic Studies at the University of Tasmania in Australia. “Balloons or balloon fragments were the marine debris most likely to cause mortality, and they killed almost one in five of the seabirds that ingested them.”

With an estimated 244,000 metric tons of floating marine debris worldwide, seabirds have quite a smorgasbord to choose from, and about half of all seabird species ingest plastic on a daily basis.

But why balloons, of all things?

Because they look a lot like squid, according to the study.

And although all plastic debris is bad, Roman says soft plastic is the worst: similar research into plastic ingestion by sea turtles found that while hard plastic fragments can pass quickly through the gut, “soft plastics are more likely to become compacted and cause fatal obstructions."

Scientists have been tracking the amount of plastic eaten by seabirds for decades. In 1960, plastic was found in the stomachs of fewer than 5%. By 1980, that had jumped to 80%.

It was, perhaps, only a matter of time: Plastic debris has been accumulating rapidly in the world’s ocean, roughly doubling every decade. A 2017 study by researchers at the University of California Santa Cruz found one big reason for the rapid accumulation: A jaw-dropping 91% of the plastic manufactured since 1950 hasn’t been recycled. It winds up instead in landfills.

To date, more than 200 marine animal species have been documented consuming plastic, including whales, seals, fish, and turtles. And of all those species, seabirds are most at risk.

And while hard plastics are less likely to kill than soft plastics they were still responsible for more than half of the seabird deaths identified in the study.

“The evidence is clear that if we want to stop seabirds from dying from plastic ingestion we need to reduce or remove marine debris from their environment, particularly balloons,” Roman said.

The growing movement to ban plastic straws (which have been found lodged in the nostrils of sea turtles) is a start. To date, companies like Starbucks, Hyatt Hotels, and Royal Caribbean Cruises have announced they won’t be using plastic straws anymore.

Perhaps most fittingly, those companies include SeaWorld Entertainment, a popular special-event destination.

And parents planning their to hold their kids’ birthday parties at SeaWorld or the beach can help by leaving the balloons at home.