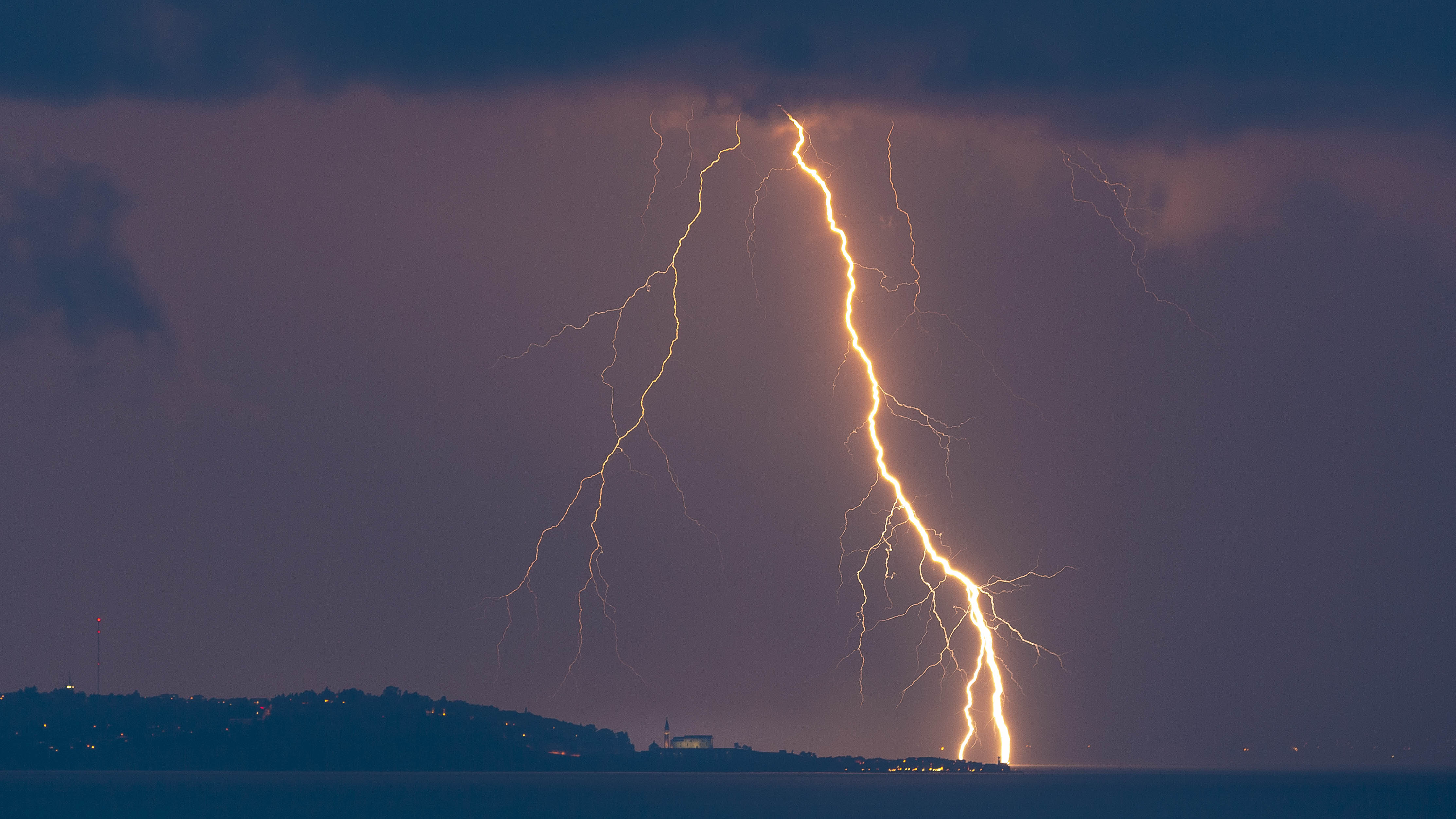 It was a lightning strike heard ’round the world.

And the man it struck is alive and well today (along with his three German shepherds) thanks to the quick thinking and CPR training of staffers at AAHA-accredited Stuebner Airline Veterinary Hospital in Spring, Texas, just north of Houston.

A hospital security camera caught it all on video. One look at the video below, and it’s easy to understand why Stuebner office manager Liz Roesner, LVT, thinks it’s a miracle the man is alive at all. Roesner has something to do with it, as well—after CPR saved her husband’s life when his heart stopped two years ago, she became a fierce advocate of CPR training for Stuebner employees. Eventually, 35 out of 70 team members took the voluntary training sessions she organized.

And two of them helped save the man’s life.

The man’s name is Alex Coreas, and he was walking Sophie, Honey, and Hazel in front of the hospital a little after 7 p.m. on October 3rd during a heavy thunderstorm.

They were wrapping up the successful surgery around 7:15 when veterinary technicians Bill Wilson and Amanda Bartlett left the building together, hoping to make it home before the storm got worse.

Wilson and Bartlett got into their cards and were texting their respective spouses when, “all of a sudden, BAM! The loudest thunderclap you ever heard. We looked at each other like, ‘dang!,’” said Wilson.

They were still staring at each other when a man suddenly ran in front of Wilson’s car, gesturing wildly. Wilson recognized him as Corey Hart, the father of a Stuebner intern, there to pick up his daughter, who’d stayed late (It was a last-minute change of plan for Hart, who, like Wilson and the other volunteers, wasn’t supposed to be there).

The rain was pouring down, Wilson said. “I thought, something’s wrong.”

Then he saw Alex Coreas sprawled on the ground. He wasn’t moving.

By the time Wilson sped over to the man and got out of his car, Hart had rolled Coreas over on his back. “We checked for responsiveness,” Wilson said. They found nothing. No pulse. No breathing.”

The two men started doing CPR on Coreas, heedless of the rain that soaked them. Or the lightning that continued to fork the sky.

Inside the hospital, word quickly spread. Corona, who was still wrapping up surgery, said, “Everyone who knows CPR, get outside! They need help.”

Mittler, who knows CPR, dashed for the door. She described the scene outside as “Crazy. [Coreas’] shoes and his socks had been blown off; his shirt and his shorts were charred. And there was a pretty good-size hole in the sidewalk where the lightning hit.”

Mittler ran to Hart and Wilson, who was busy doing chest compressions. It was strenuous work and they’d been at it for more than five very long minutes. Wilson told her he was getting tired. So was Hart.

Mittler told Wilson to move over, said, “Let me help you,” and started doing compressions on Coreas as well, with all three taking turns while the storm raged. “Lightning was striking all around us,” Mittler remembers. “I told Bill, ‘We’re gonna get struck.’ He said, ‘Just keep going, we’ll be all right.’”

So they kept going.

Coreas had been down without visible signs of life for 10 minutes before an ambulance pulled up, followed shortly by a chopper and several fire trucks.

But Coreas’ heart was beating. The nonstop compressions had worked.

“We got his heart and respiration back right as the ambulance arrived,” Wilson said. Coreas regained consciousness just as the Stuebner heroes turned him over to the care of the EMTs. “The first thing he said was, ‘Where are my dogs?’”

The dogs were fine, thanks to Roesner, who’d done some quick thinking of her own.

While Wilson, Hart, and Mittler were working to keep Coreas alive, Roesner was having dinner when she got word that a tornado had touched down near the hospital. “So I called in to check.” The technician who answered told her, “’There’s no tornado, but Bill’s in the parking lot doing CPR on a guy who got struck by lightning.’ I said, ‘You’ve got to be kidding.’”

Roesner quickly pulled up the hospital’s security video on her phone, saw the video of the lightning strike, saw the three dogs run off, and thought, “There’s no way this guy’s going to survive. We need to get the dogs back; they’re all his family will have left of him.” She immediately posted to Facebook that three dogs were on the loose, described them, and asked for people to be on the lookout.

She posted while her staff was still doing CPR.

A girl who was just drifting off to sleep heard her phone beep, checked Facebook, and realized from the description that it must Coreas’ dogs; they’d often walked their dogs together.

She immediately got dressed and joined the search party, which quickly located the dogs, who hadn’t run far but were shying away from the other searchers. Because the dogs were familiar with her, she was able to coax them over and gather them by their wet leashes, which had been dragging in the rain.

Coreas was alive; his dogs were safe. It was still less than 30 minutes since the lightning strike. “I used to hate social media,” Roesner said, “but now I kind of like it.”

Wilson calls the incident a testament to the value of ongoing CPR training, which he’s been doing since he was 13. “You don’t have to think about what you’re doing,” he said. “You just know.”

Mittler’s sentiments echo Wilson’s, but hers are colored by the memory of the lightning bolt that exploded on the ground 30 feet away as they worked on Coreas.

“You just do what you can do; you jump in and start helping,” Mittler told NEWStat. “Without thinking,” she added, and started to laugh. “Obviously.”

Roesner, thinking of the same lightning strike that Mittler was, said, “There could have been four victims out there.”