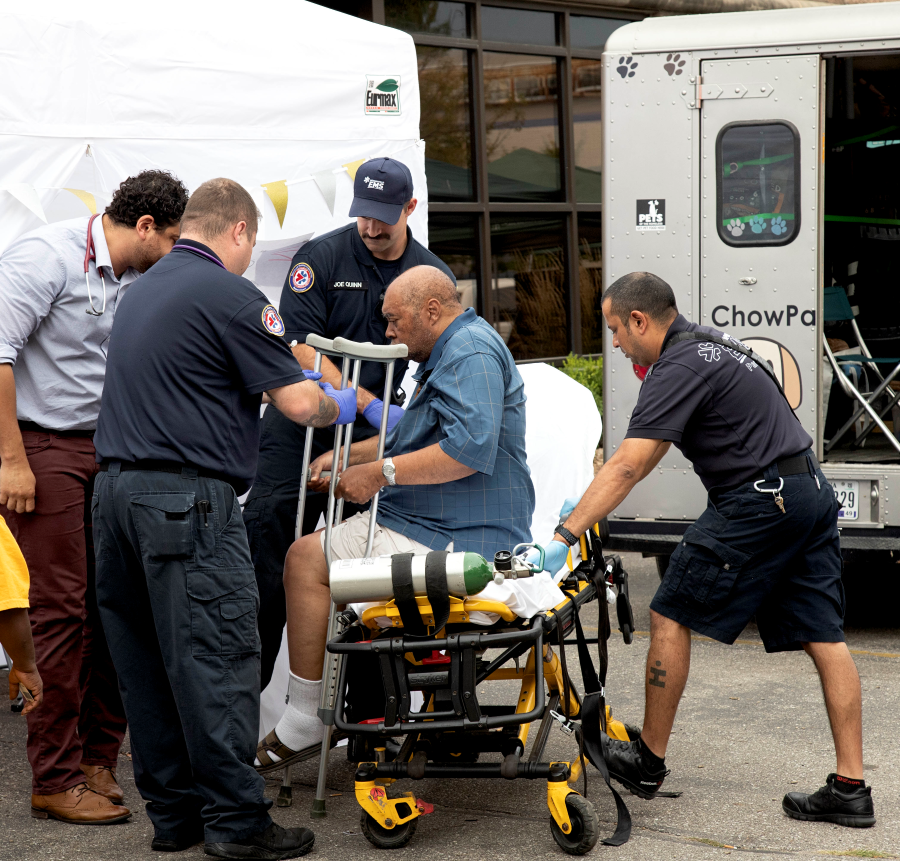 (Paramedics prepare to transport a homeless man having chest pains to the hospital during the S.O.A.R. free street clinic at Connexity by AAHA 2019. )

“When the ambulance came, I started to freak out a little,” said Heather Loenser, DVM.

Loenser, AAHA’s senior veterinary officer, was volunteering at a free street clinic for people and pets experiencing homelessness alongside a number of other Connexity by AAHA attendees in Indianapolis, Indiana, last month when she heard the siren.

“A homeless man who’d been living on the streets with his wife had come to the clinic to see a physician—there were two volunteering at the clinic. The man didn’t need veterinary services because, unlike most of the homeless who came that day, he didn’t have a pet.

“But he did have chest pains.

“When his wife found out, she dragged him over to the physicians’ tent. The one who examined him realized he was having a heart attack and called emergency services, which took him to the hospital.”

Hopson said the man’s wife called the next day to thank everyone and report that her husband was fine. It turns out he had a regular doctor, but his next appointment was more than a week away. His visit to the free clinic likely saved his life.

“It made me pretty emotional,” Hopson told NEWStat, “because if it was just that one person we helped, it matters.”

If Hopson has special empathy for the homeless, it’s because she was homeless herself for almost a decade, sleeping on the streets, in vehicles and abandoned buildings, and the occasional couch in some kind soul’s home. This makes it all the more remarkable that she eventually overcame her hardships and graduated from law school in 2012. Of her journey, Hopkins said only, “It was a long road, I can tell you that.”

Wanting to make a difference in her community, the freshly minted attorney Hopson started doing street outreach for Horizon House, an Indianapolis nonprofit dedicated to helping the homeless. With Horizon House, she visited local homeless camps to help people access services that could help them get off the streets and into housing. “I loved it,” she says, and she’s been doing it ever since.

But she soon noticed that many of the people experiencing homelessness had pets, and realized that there weren’t any services to help those pets.

Right around that time, Hopson met Leslie Brooks, DVM, MPH. Brooks wanted to use her veterinary skills to help homeless pets. Together, the two women launched what is now S.O.A.R.’s Street Outreach Program, visiting the homeless in camps, under bridges, in vehicles, and abandoned buildings to provide food, vaccines, pet exams, and connection to social services for humans in need.

Hopson estimates that 90% of the people they work with have pets, but says, “We work with them as a whole unit.” She says when it comes to the homeless, you can’t separate the person from the pet—for people in crisis, their pet is often their best and only friend. She says many homeless people will forego services they desperately need if it means being separated from their pet.

Hopson said that being a homeless pet owner is a kind of balancing act. You’re living on the streets and trying to survive on a limited income while at the same time trying to navigate your health and the health of someone you love. And both of you usually have a medical issue that needs to be addressed.

She believes that the health of homeless people and their pets are inextricably linked, and effective outreach efforts need to involve both.

“The health of the human and the animal are really dependent on each other,” Hopson said. “The bonds are very strong with the people we work with on the streets. It’s really important that those pets and people can stay together.”

“It does us no good to work on the animals if the people aren’t healthy and aren’t connected to resources. Because then the animal’s going to be in a perpetual state of instability, too.”

Hopson said S.O.A.R. was especially grateful to Connexity participants. All told, 4 cats and 15 dogs came through the clinic along with their owners that Sunday.

“Connexity volunteers made a huge difference in this health fair,” Hopson said. “They really connected with people.”

“That’s difficult for [volunteers] sometimes, because they come in with a preconceived notion of what homelessness is and what those people are like,” Hopson added. They’re just people who’ve run into problems. Some of their own making, but oftentimes not. In the end, Hopson said, “They’re regular people.”