AAHA AAHA publications NEWStat® 2020-12 Pain case of the month: Lacie—Acupuncture to treat lameness in a cat

Pain case of the month: Lacie—Acupuncture to treat lameness in a cat 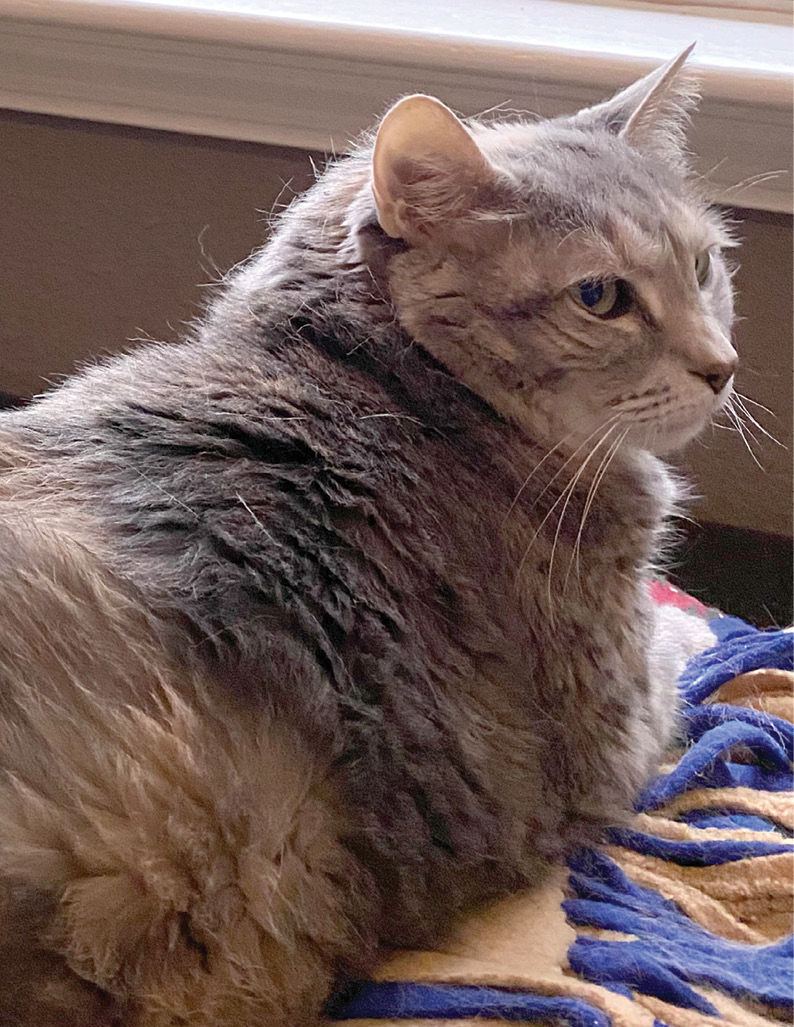 Diagnostics including pelvic radiographs, bloodwork, and blood pressure measurement were recommended and declined.

No specific inciting event for the patient’s lameness was reported. In the days following onset, behavior changes including lethargy, isolation, and hyporexia were noted. The patient ceased to walk downstairs for meals, preferring to have meals brought to her upstairs. The patient was also noted sleeping in a closet rather than in her usual designated bed in the home office.

The Feline Musculoskeletal Pain Index (FMPI) was used as a clinical metrology instrument to assess the patient’s pain objectively. The index was further used as a guide to help the patient’s caretakers understand that the patient was experiencing pain, as well as the recommendation for treatment. The patient’s total score at presentation was 28 (out of a possible total score of 68, with a higher score indicating less impairment).

Physical exam revealed grade 2/4 lameness of the left pelvic limb. Focally diffuse barbered fur was noted over the rump. Exam of the underlying skin was normal, with no lesions or evidence of ectoparasitism.

The patient’s body condition was mildly overweight with a body condition score of 6/9. Mild atrophy of the left biceps femoris was noted, resulting in a muscular condition score of 2/3. The right quadriceps and gluteal musculature appeared mildly hypertrophied. Myofascial palpation revealed mild restriction characterized by taut muscular bands over the right dorsolateral cervical region. Palpation along the spine revealed myofascial trigger points at the left caudal lumbar region. Increased tail flicking and skin rippling were noted upon light palpation over the rump. A pain response characterized by head turning, mydriasis, and narrowed palpebrals was elicited upon gentle palpation over the left coxofemoral joint. No pain response was appreciated upon palpation over the right. Range of motion of the left coxofemoral joint was approximately 50% decreased on extension and mildly decreased on flexion. Palpation of the left hamstring muscles revealed taut muscular bands. No abnormalities were noted on examination of the bilateral stifles, tarsi, or hind paws and digits. The thoracic limbs were unremarkable.

Neurologic examination revealed no deficits. Mild diffuse tartar and gingivitis were noted. A pain score of 2/4 and a Fear, Anxiety, and Stress Spectrum score of 2/5 were recorded. The remainder of the general physical exam was unremarkable.

The patient appeared most painful at the left coxofemoral joint. Evidence included gait evaluation, pain response to palpation, decreased range of motion, and presence of barbered fur. While clinical signs were described as acute onset by her caretakers, an acute-on-chronic onset was suspected given her myofascial restriction, trigger points, and compensatory hypertrophy of the right quadriceps and gluteal musculature.

Feline hyperesthesia associated with chronic musculoskeletal pain was suspected due to a history of regional barbering, absence of skin lesions and visible ectoparasites, tail twitching, and skin rippling.

An initial treatment schedule of every two to three days the first week followed by once-weekly treatments pending Lacie’s progress was proposed. Lacie received a total of eight medical acupuncture treatments over five weeks. Analgesics and nutraceuticals were declined by the caretakers due to an inability to administer oral and parenteral therapies. Several attempts were made to demonstrate medication-administration techniques, but the patient remained resistant.

This plan was created to decrease the effects of maladaptive pain via neuromodulation of the segmental spinal nerves that innervate the hip musculature; improve motor nerve function via neuromodulation of the sciatic, cranial gluteal, and femoral nerves, which innervate the hip abductors, adductors, flexors, and extensors; and improve parasympathomimetic-directed release of anti-inflammatory and analgesic substances via neuromodulation of points along the autonomic nervous system. Treatment of local tender or trigger points promoted myofascial release, improved blood circulation, and removal of muscular waste products.

Resolution of hyporexia was reported after the first treatment. After two treatments, physical exam revealed grade 1/4 lameness. Resolution of lameness was reported after three treatments. Weekly treatments were continued to address ongoing myofascial restriction and further reduce inflammation associated with suspected coxofemoral degenerative joint disease, resulting in resolution of all local trigger points along the left lumbar region. The patient’s range of motion on extension of the left coxofemoral joint improved from an estimated 50% to 80%. Decreased barbering and new fur growth were noted. No further isolating behavior was reported following treatment.

The lack of diagnostics in this case may be interpreted as a deficiency despite the positive clinical outcome. Given that up to 80% of senior cats with histologically confirmed degenerative joint disease may have no radiographic evidence of disease, it was determined that deferring diagnostics in favor of initiating treatment for suspected feline degenerative joint disease or osteoarthritis was a reasonable option.

Photomedicine may have benefited the patient’s treatment plan, but no laser unit was available. Additional acupuncture points, including SP6, SP9, SP10, and BL60, were deferred because of the patient’s sensitivity in these areas. These may be excellent areas to target with photomedicine. It is possible that a dense-disperse electroacupuncture frequency may have improved treatment outcomes, but no such unit was available at the time of treatment.

Often, it can be difficult to convince any owner that the signs that they are seeing are due to pain. As in this case, I like to eliminate that doubt by having the owner fill out a pain metric. In this case, the FMPI was used, where the owner observations produced a pain score. This allows us as practitioners to move past that doubt and get to the problem at hand.

Diagnostics are the keystone of any good case workup; however, there are some owners who are unwilling to allow things like radiographs because of money or personal reasons. Knowing exactly where a lesion is located is especially important in medical-based acupuncture, which uses a Western approach to therapy based on specific lesion locations. But a well-done physical exam, as in this case, often can substitute for more specific diagnostics, but with one caveat: If the patient does not respond to therapy, then further discussion with the client must be conducted, and documentation of that discussion needs to be made and put in the medical record.