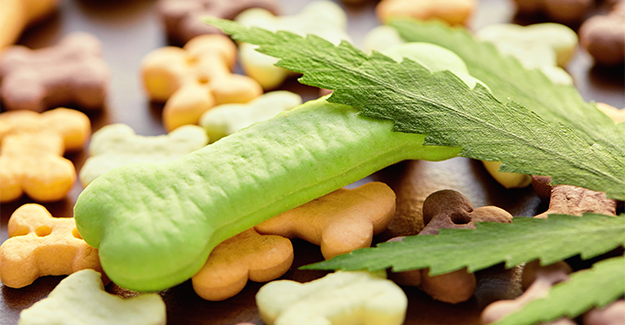 Veterinarians are seeing a rise in cases of cannabis poisoning in pets as the legalized use of marijuana for recreational purposes continues to spread, according to new research.

The researchers analyzed 2021 survey data from 251 veterinarians in the US and Canada. The survey included questions about cannabis poisoning cases encountered by the respondents over the previous few years.

The analysis showed that the number of cannabis poisoning cases jumped significantly in both countries as more and more US states continue to pass legislation legalizing marijuana. Canada legalized it for recreational use in 2018.

While cannabis poisoning was most frequently seen in dogs, respondents also reported seeing cases of cannabis toxicity in cats, iguanas, ferrets, horses, and cockatoos. Most cases were benign, and those animals were treated with outpatient monitoring. Nearly all recovered completely.

“The most common route of exposure was from edibles,” lead author Jibram Khokhar, PhD, told NEWStat. He said edibles were followed closely by “other oral forms of consumption,” such as carelessly discarded joint butts or dried cannabis leaves.

Khokhar, an assistant professor of Biological Sciences at the University of Guelph in Ontario, Canada, added that “The most common symptoms included urinary incontinence, disorientation, ataxia [abnormal or uncoordinated movements], lethargy, hyperesthesia [increased sensitivity of the senses], and bradycardia [slowed heart rate].” Although pets died of cannabis toxicity in a small number of cases, the researchers note that other potential causes—such as underlying conditions—could not be ruled out.

Most people told their veterinarian that their pets’ exposure happened accidentally.

“However, I don't think we can rule out intentional use,” Khokhar said, “either for recreational purposes or medicinal purposes.” He also noted that, as of yet, cannabis-based medicine is not approved for veterinary use in either the US or Canada.

Which, sadly, means those recreational purposes could also include entertainment: Khokhar noted the number of videos on social media that show people intentionally giving marijuana to their dogs or cats just to watch what happens.

An additional complication: many of today's edibles come packaged in chocolate and fruit flavors, which are very appealing to many pets. Chocolate, grapes, raisins, and citrus are toxic to dogs and cats, as is the sweetener xylitol that may be used in marijuana gummies. A pet who has gotten into these types of edibles might be suffering from a multi-drug toxicity, which makes it more difficult for clinicians to diagnose.

As for the post-legalization jump in reported cases of cannabis toxicity, Khokhar told NEWStat that the fact of legalization alone could account for the increase: “When the drug is legalized, more people are going to be willing to report,” Khokhar said. “In the past they might have come in with the same issue and said, ‘I don’t know what happened to my pet.’”