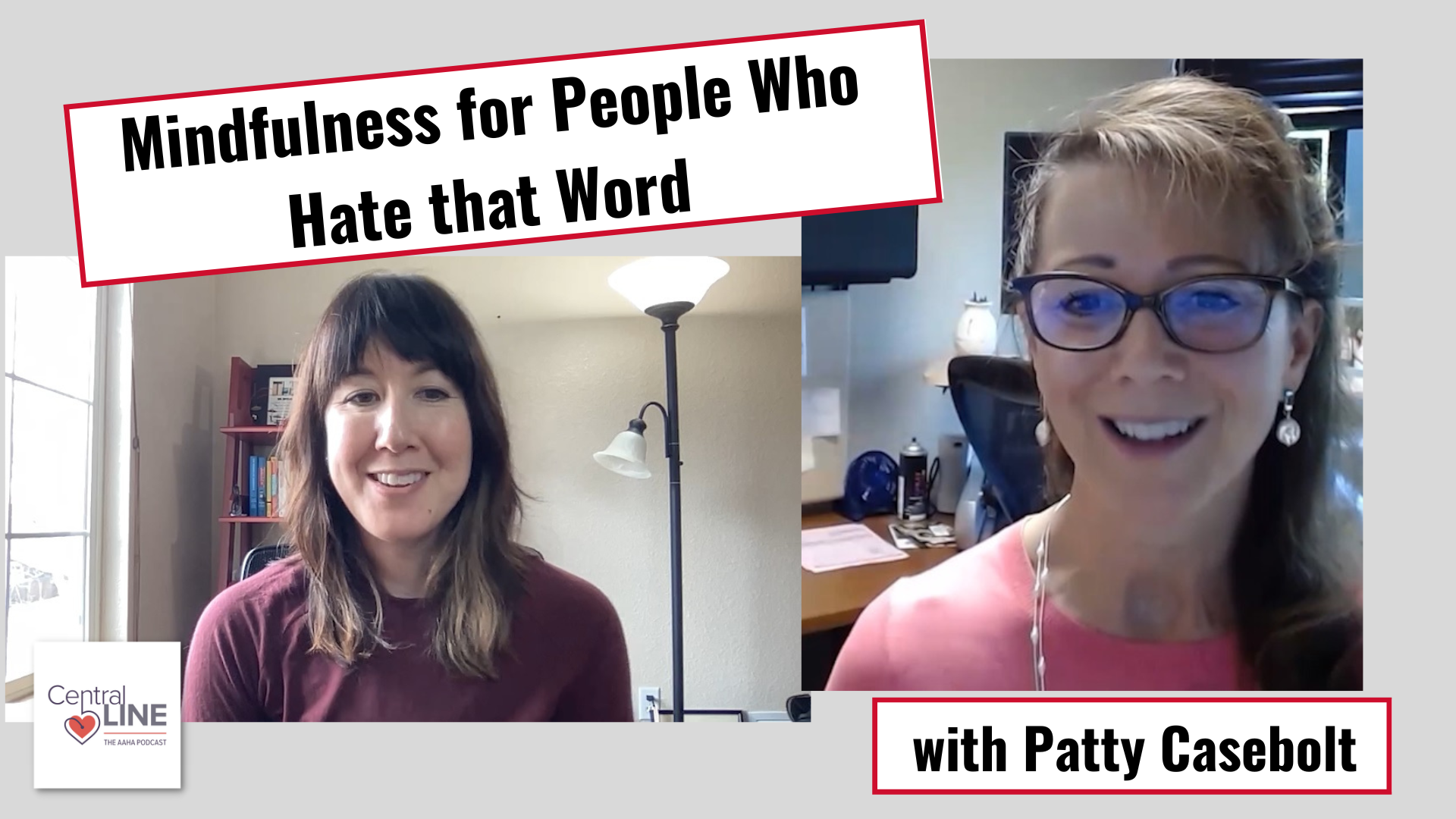 I’m willing to bet that many of you reading this are high achievers. Veterinary medicine is chock-full of goal-oriented people who are accustomed to doing well in school, meeting challenges head-on, and problem-solving their way through emotional and difficult days. I’m like that too, which means when I find something that doesn’t come naturally to me, I tend to do everything I can to avoid it.

This has been my relationship with any mindfulness or meditation practice I’ve ever tried. It’s hard. It’s boring. Think of all the things I could be doing instead! But I am also a huge fan of business podcasts featuring CEOs, entrepreneurs, and thought leaders, and nearly all of them credit at least part of their success to a mindfulness and/or meditation practice. So I stay interested, but it doesn’t stick.

Our first-season podcast sponsors, CareCredit, introduced us to Patty Casebolt, chief operating officer at the Medical Eye Center, who has worked in human healthcare for over 30 years and is also a certified mindfulness/meditation facilitator. Patty and I talked about how important it is to make time for ourselves even amidst the chaos of a busy day at the clinic, and she pointed out that while veterinary professionals and other caretakers often feel guilty for doing so, we are setting an example for those around us when we do. Patty works “mindful moments” into her day whenever she can, whether it’s taking the first sip of coffee or walking from the car to the door of her office, and her team starts their meetings start with a mindful minute together.

Patty also appeals to the data-driven nature of a lot of us in the science professions by talking about the actual physical effects a regular meditation practice can have. Take a look at some excerpts from our conversation in Patty’s episode of Central Line: The AAHA Podcast, “Mindfulness for People Who Hate that Word,” which aired June 14, 2022:

Patty Casebolt: I'm a little bit of a skeptic. Even though, like I say, I'm a closet hippie, I still am very much mainstream, I want to know the data. The first time I was introduced to this was at a mindfulness summit at UC Berkeley many years ago, and they talked about a study that had been done in 2008 at NYU, and it's where they were doing functional MRIs (fMRI) on Tibetan monks and looking at how their brains were firing under stressful situations. And what they discovered is that instead of that switching, like we were talking about, going from the prefrontal cortex [the executive problem solving part of the brain] back to the amygdala [the emotional fight/flight/freeze part], they noticed that these monks were able to maintain activity in both sides of their brain, and they found that that was highly unusual. For most people that just doesn't happen.

The University of Wisconsin, Madison did an eight-week study where they took long-term meditators and people who had never meditated, and they put them through [a meditation practice for] eight weeks, and what they noticed is at four weeks, they still hadn't seen a big difference in [the fMRI of] the non-meditators, but at eight weeks, the brains of the people who had not ever meditated were working the same as those who had meditated their whole lives, and they were astounded at the results. And they have done several other studies that have confirmed these results.

Now, it's kind of a good news/bad news situation. Because of the neuroplasticity of the brain, they were finding it was wiring itself together, those two regions, over a minimum of eight weeks. However, for those who stop meditating, the wiring goes back. So just like exercise, what I have found through my life now is that if I stop meditating, I will go back to this kind of unregulated emotional response, versus even under a very stressful situation, if I've been meditating routinely, I'm often surprised at my internal response that I feel calm and collected and able to respond in a reasonable way rather than an unregulated way.

Katie Berlin: That is fascinating, and for somebody like me who likes to find goals, I can think, “OK, I could probably say, I'm going to try this for eight weeks." I could probably do that because it has a beginning and an end, and then I can say, "If I don't feel any different at eight weeks, maybe I could give myself permission to change something or stop." But there's a good chance that during that eight weeks, something will change and the wiring can start to shift, and that is not a very long time.

PC: Right. I don't know if your listeners have ever heard of Dr. Dan Siegel, the Clinical Professor of Psychiatry at UCLA’s School of Medicine. He's written many books, especially on child psychology, but he has really put effort into proving this. It started off as a theory, and now it has been proven time and again in these studies, and he's fond of saying, "Where attention goes, neural firing flows and neural connection grows."

He likes to say that quote a lot, and it really struck me, thinking about the neurons rewiring themselves together as a physical thing. It's not just a woo-woo thought that this is maybe more psychosomatic – it's truly happening.

Catch the rest of Patty’s episode anywhere you get your podcasts, including Apple, Spotify, and Stitcher; on YouTube; or find links to all of these platforms, full audio and video, and transcripts to every episode at aaha.org/podcast.

This episode was made possible with generous support from our friends at CareCredit.

Love Central Line? Please subscribe/follow and leave us a rating and review – it helps others find us! Send us feedback anytime at [email protected].