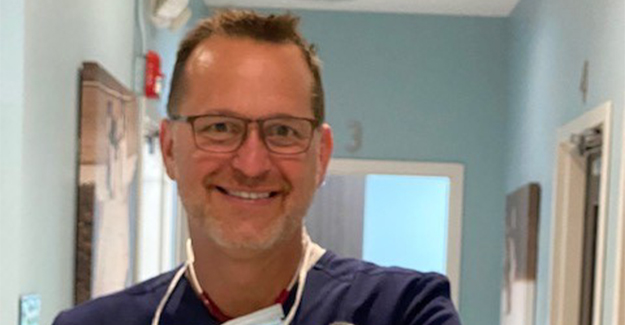 A professor once told Joseph Rossi something he’s never forgotten: “As a veterinary professional, you’re not going to make a killing. But it’s a good, honest profession. If you embrace it, you’ll always do well.”

Rossi took those words to heart.

He did well enough that the Westminster Kennel Club (WKC), in partnership with Trupanion, recently named Joseph Rossi, DVM, owner of AAHA-accredited North Penn Animal Hospital in Lansdale, Pennsylvania, as the recipient of their inaugural Veterinarian of the Year Award.

The new online award recognizes and celebrates veterinarians who make a difference in pets’ lives.

In keeping with the theme of staff wellbeing, the WKC is donating $10,000 in Rossi’s name to MightyVet, a nonprofit, industry-wide online platform founded to support veterinarians, students, and vet techs tackling mental well-being issues and continuing education in the veterinary profession, in partnership with Not One More Vet.

Rossi told NEWstat he knew he wanted to become a veterinarian since he helped  raise orphaned robins in the second grade. He also said the award was a complete surprise: “I didn’t know it was going on at all,” he says of the nomination process.

After receiving his undergraduate degree at Delaware Valley College in Doylestown, Pennsylvania, he earned his DVM from Ross University in 1987 and finished his studies with an externship at Rochester Equine Clinic. Although Rossi started his career as a large animal veterinarian in a rural practice in Northern Pennsylvania—often driving up to 270 miles a day on twisting, mountainous roads to see clients—he missed caring for smaller animals, and eventually left that practice to move downstate and opened North Penn Animal Hospital in 1996, earning AAHA accreditation in 2004.

He says becoming accredited was never in question. “I’ve always striven for the AAHA standard of care,” Rossi says. Having started out at an AAHA-accredited practice, he knew those standards and saw how they helped hospitals practice better medicine: “Veterinarians need that.”

Rossi credits his wife, Jill, and their three children for allowing him to flourish as a veterinarian and calls their love of animals a family affair: they have seven dogs, five cats, a variety of sheep, donkeys, horses, two small herds of cattle, and some rescued chickens. The family also breeds and shows Norwich terriers. And while Ross has never worked at the Westminster Kennel Club Dog Show in a professional capacity, he has participated as an owner; one of his terriers won Best of Breed in 2020.

Given that menagerie, it’s not surprising that after all these years, Rossi still considers himself a country veterinarian: “We have the James Herriot life,” he laughs. He freely admits that the romantic James Herriot ideal continues to have a big influence on his philosophy of veterinary care where “Your veterinarian is part of your community and part of your life.”

He saw other practices have a really hard time during COVID, but says North Penn got through it relatively intact: “We fared really well,” he says. “We had each other’s back.”

He believes his staff’s sense of mission sustained them through the worst of COVID. Some employees might have been having a bad day, “but you’d never know it. I’m so proud of my employees.”

Ask Rossi how he feels about winning Veterinarian of the Year, and he’ll tell you it’s never just one person that wins.

“I didn’t win anything,” he says. “It was my staff who won it. I just have a team around me that’s unbelievable.”