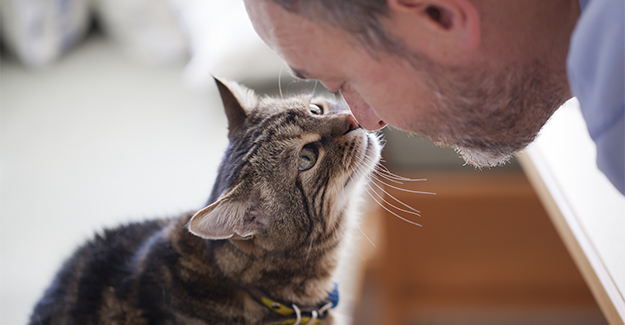 Most cat memes are predicated on the idea that cats are aloof, impersonal, and, frequently, just plain jerks. And most of those are posted by their owners.

But research out of Oregon State University (OSU) suggests that we’ve underestimated the depth of the bonds cats can form with their owners—in fact, the researchers found that the majority of cats are securely attached to their owners.

The 2019 study indicates that cats have been getting a bad rap—much like dogs, pet cats form both  secure and insecure attachments with their human caretakers.

The OSU researchers conducted a test of these two attachment types on 79 kittens and 38 adult cats.

The entire test was filmed, and the researchers analyzed the video to classify the cats’ attachment type.

Of the kittens, 9 couldn’t be classified, but of the remaining group, 64.3% were categorized as securely attached and 35.7% as insecurely attached. The adult cats showed similar rates, with 65.8% demonstrating secure attachment and 34.2 % being insecure.

NEWStat reached out to lead author Krystin R. Vitale, PhD, an assistant professor of Animal Health and Behavior at Unity College in New Gloucester, Maine, and formerly a researcher in the Human-Animal Interaction Lab in OSU’s College of Agricultural Sciences, to find out more.

NEWStat: Why do you think more studies like this haven’t been done on cats?

Krystyn Vitale: I think there’s this idea that cats are not especially social animals, so why should we study their social behavior? However, as we saw in our previous studies, cats display a range of social behavior and often actually prefer social interaction with people over other rewards. So, work in this area indicates we may be underestimating the importance of social interaction for cats.

KV: Yes, for sure! Cats and dogs both display flexible social behavior. Some are less social and some are more social. It very much has to do with the personality of the cat or dog themselves and it’s counterproductive to say all cats or dogs are one way.

NEWStat: Do cats bond with humans differently than dogs do?

KV: In our study, we found that cats and dogs display the same attachment behaviors toward their owners. This indicates there are many similarities between how the two species bond to humans. However, they’re still different species and they may show affection in different ways. For example, a dog may play fetch with their owner while a cat may rub on their owner.

NEWStat: Do your findings have any bearing on the way veterinary professionals might treat their feline patients? And if so, what should their takeaway be?

KV: Yes, our findings that cats display attachment toward their owners indicates cats may also be at risk for attachment-related disorders. Veterinary professionals may want to consider that cats may be able to form separation anxiety or other disorders related to separation from their owner and that cat-human attachment is a vital part of the cat’s welfare.

Find out more about why cats act the way they do, and how it can help you to practice better feline medicine, in the AAHA Canine and Feline Behavior Management Guidelines.