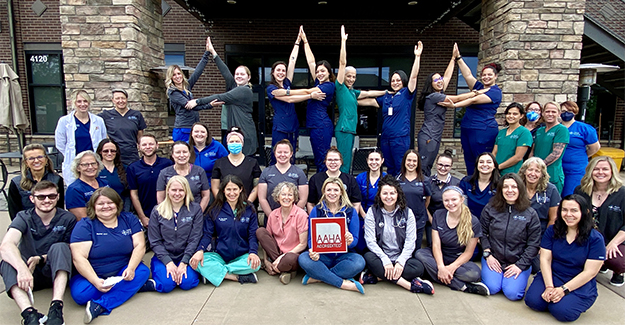 2022 AAHA-Accredited Practice of the Year (APOY) Finalist Spotlights: This is the first of four finalist spotlights that will run each Saturday from August 20 to September 10. The finalists are presented in no particular order. The winner will be announced at a live ceremony on Thursday, September 15, at the Connexity conference in Nashville. Learn more at aaha.org/connexity. The AAHA-Accredited Practice of the Year awards are generously supported by Zoetis.

Before opening Four Seasons Veterinary Specialists in Loveland, Colorado, Tara Britt, VMD, DACVS, and Jennifer Lowry, DVM, MS, DACVR, each had their own veterinary businesses in the area.

Britt had come from the east.

After graduating from the University of Pennsylvania School of Veterinary Medicine in 2002 and completing an internship and surgical residency in New Jersey, she did a surgical oncology fellowship at Colorado State University (CSU) and became a diplomate of the American College of Veterinary Surgeons in 2007. Five years later, she was doing surgeries across northern Colorado.

Lowry arrived from the west.

A 1987 graduate of the UC Davis School of Veterinary Medicine, she came to CSU for a radiology residency and MS degree, and became board certified in veterinary radiology in 1991. With a passion for teaching, she not only taught at UC Davis, the University of Illinois, and CSU, but she traveled from Cheyenne to Boulder throughout the 1990s and 2000s with her own mobile radiology practice, where she provided CE for veterinary teams, as well as performed ultrasounds and interpreted x-rays.

Then the practice Britt and Lowry had both been using as their home base announced it was changing ownership.

“Jen and I didn’t know each other very well at the time, but we looked at each other and said, ‘well, what are we going to do?’” Britt said.

“We got together with our husbands and talked about what it would look like if we started a veterinary specialty practice where we could grow it into everything we wanted it to be—where high-quality medicine and creating a fun place to practice could be our top priority.”

“With that in mind, we went shopping for a building, and an architect, and lawyers to do our operating agreements,” Britt said. “We did all of that in a relatively short period of time: We bought the building in August of 2013 and opened our doors in March 2014.”

These days, Four Seasons has 75 employees and offers an extensive list of specialized services, including surgery, oncology, radiology and ultrasound, cardiology, dentistry, and critical care, as well as 24-hour emergency and urgent care for dogs and cats.

And it all started with a gurney.

“[The building] had been built in 2008 but remained empty and undeveloped until we bought it,” Britt said. “It was a shell, but there was an elevator, so we knew patients would have to go up and down the elevator at some point. We bought a gurney to make sure it fit—and once we checked that box, then we moved forward from there.”

They hired Boulder, Colorado-based Animal Arts, an architecture firm that specializes in animal care spaces, to flesh out the design. One of the architects they worked with had been a veterinary specialty technician prior to becoming an architect, and Rona McElroy, one of Four Seasons’ veterinary specialty technicians who has been around since the beginning, also contributed. “They gave a lot of input on workflow and design to make it as streamlined and efficient as possible,” Britt said.

But if the physical space is the house, it’s the people who make it a home. The founders brought on Amanda Mahoney, MA, to be the Leader of Wellness and Culture. Mahoney has a master’s degree in clinical psychology and is a senior certified instructor in Compassion Cultivation Training™, an eight-week program for cultivating compassion for the self and others that was developed at Stanford University.

“What's lovely about Amanda's presence is her availability to help team members in processing emotionally heavy things that aren't always suitable to discuss in-depth out on the floor,” said Hospital Director Courtney Hubrecht. That includes challenges outside the practice: “Certain current events in the world can be a trigger for some people—so if it is more sensitive in nature, she’s there to help our team identify and problem solve, manage those emotions, and provide practical tools to move forward. Amanda helps guide those conversations and thought processes to create a really safe space.”

This support extends beyond the staff to the clients.

“For many clients, losing a pet is losing a family member. Naturally, our doctors and team wish they could offer an indefinite amount of time to help support that grieving client; we all do. However, there are other patients in need of medical care who are relying on our team," Hubrecht said. "Not only does it help having a professional onsite who can step in and offer great support to that client, but it relieves our team from feeling as though they are abandoning a client in distress, mitigating their risk for empathy fatigue. It also gives our doctors and team permission to dedicate their undistracted focus to other patients and provide quality medical care they can be proud of in line with their standards.”

Hubrecht recently completed AAHA’s Veterinary Management Institute (VMI) and she applies her own interest in psychology and employee wellness with her veterinary experience to co-create team trainings. “Recently, we facilitated a leadership development session focused on the topic of grief,” she said. “[Amanda and I] work together to identify topics that would be helpful, such as ‘what are the dos and don’ts of talking to a grieving client?’ and we’re looking at developing a more formal grief support program.”

“We are really trying to pave the way to be a systemic change within the field as a whole too, and to normalize talking about the struggles [we all face] while still maintaining our own wellness and well-being,” Hubrecht said.

Four Seasons aims to be a part of that change through outreach both to clients and other practices. Twice a year, they host a CE event about a timely topic, such as the Spring 2022 event, which featured world-renowned CSU professor of animal sciences Temple Grandin, PhD, MS, and had participants from over 90 hospitals in five states.

The practice has Lillie Orth, a full-time outreach coordinator, who manages email communications and social media, including a Facebook account with more than 12,000 followers and an Instagram page where they find fun ways to engage their audience while also educating about available services. For example, they created an image guessing game that showcases their 64-slice CT.

“I’d like to give a shout-out to Tara for getting us involved in social media because even before we started the business, she’d made a connection with someone at a meeting for entrepreneurs who really helped us get that going,” Lowry said. “Tara already had these really interesting connections with people she’d met in other capacities, so we had a Facebook presence from day one.”

The followers include both pet owners and other veterinary professionals. “Most of the followers come from the surrounding area, but it does spread out into other countries and continents as well,” Hubrecht said. “It’s great because our mission that we feel very passionately about is reaching a large audience. That’s really the hope—that we continue to get the Four Seasons vibe out into the world and into the field.”

Excellence in care. With love.

If you visit Loveland, Colorado, around Valentine’s Day, you’ll see an entire city covered in hearts. The lampposts and store windows are strung up with declarations of affection—and the local post office receives an average of 100,000 valentines each year that come through just to receive the city’s postmark. So, it’s no surprise that Four Seasons’ practice motto is: “Excellence in care. With love.” This sentiment carries through to every aspect of operations and is grounded in the founders’ dedication to creating that dream practice culture.

“Being a hospital that is independently-owned means that the people who make the decisions and can bring in these efforts are right alongside you,” Hubrecht said. “They're hearing your concerns and what's weighing on you first-hand. They're seeing it.”

So, what would it mean to them to be the 2022 AAHA-Accredited Practice of the Year?

“I'm proud that our hospital is an AAHA member. It makes me proud every day to be a part of this hospital and to be a founder, so it would be an extreme honor to be recognized in this way,” Lowry said. “That would be a mind-blowing experience, to be honest.”

“It’s true,” Britt said, “Our goal from the beginning was to practice the highest quality of medicine and to do it in a fun environment. We set out to be different, to have a higher standard for culture, so it’s extremely exciting to be considered.”

Hubrecht credits Laura Halpin, BVetMed, MRCVS, who has worked as an ER doctor at Four Seasons since the beginning and is also the Hospital Medical Coordinator, as being instrumental in educating the team and generating enthusiasm for AAHA accreditation.

“What really stood out to me was that it was one of our team members who came to us with the idea to apply,” Hubrecht said. “It’s one thing for the founders to know we’re a really great organization, but for one of our employees to think we have a shot at this, made us think, yes, let’s put our name in the hat. We are all so driven to provide the highest standard of care, and it’s a badge of honor to wear that red [AAHA] label.”

About the APOY Awards

This is the 13th year for the AAHA-Accredited Practice of the Year (APOY) award, which recognizes outstanding achievements in workplace culture, patient care, client engagement, and community involvement among AAHA-accredited practices. AAHA hospitals are known for their excellence, so this award is highly competitive. The awards committee evaluates each finalist on its most recent AAHA accreditation score, the practice’s mission and vision, team composition, CE and training programs, community service activities, and more. Learn more at aaha.org/awards.