EVEN WITH SIGNIFICANT ANNUAL PET INSURANCE growth—averaging 23.4% per year over the past five years—the pet insurance penetration rate for dogs and cats is 2% in the United States and 2.5% in Canada, according to the 2021 State of the Industry Report from the North American Pet Health Insurance Association (NAPHIA).

A lot of people also harbor old ideas about pet insurance from the earliest days of the industry or misunderstand pet insurance entirely, including consumers who expect HMO-style, low copayments for everything or state regulators who think it’s sold by veterinary practices like how travel agents sell travel insurance. Insert eyeroll.

Because of the patchwork of requirements for pet insurance companies who want to provide policies to people in various places, watch for ongoing efforts by the National Association of Insurance Commissioners to develop a model law that could provide consistency— and clarity—so that consumers have access to the same coverage no matter where they live.

In the meantime, veterinary teams often rely on the experiences of their clients, which may focus on disappointment, with people more likely to share how many times pet insurance denied claims or excluded pre-existing conditions. Perhaps that’s why “There are too many exclusions” and “It’s not worth the money” topped the list of reasons veterinarians don’t recommend pet insurance, according to another study published by NAPHIA in 2016.

After a slow start in 2020, the pandemic seems to have boosted the appeal of pet insurance. Kristen Lynch, NAPHIA executive director, shares a theory on that. In addition to people being home more with pets and acquiring more new pets because they were home more, Lynch wonders about pandemic isolation for people who live alone. “For many,” she says, “their pet was their only companion or their primary companion. So, that’s all sort of the societal and human-animal-bond type stuff, but then for pet insurance, there is an additional factor, and that’s adding the element of financial uncertainty to the mix.”

Lynch talks about pet insurance as proactive compared to credit or payment options, which she sees as reactive. With insurance, she explains, people start with more confidence and less worry about taking pets in for veterinary care. “It frees me up from having to make emotional decisions,” she says. “It’s a very rare form of emotional coverage.” 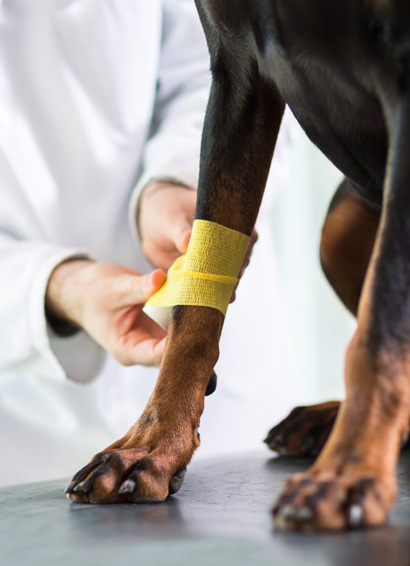 For “The Impact of Pet Health Insurance on Dog Owners’ Spending for Veterinary Services,” published in 2020, AVMA researchers used several models and “found that pet health insurance had a significant and positive impact on the amount spent at the veterinarian.” They, however, did not find a similar positive association between pet insurance and increased veterinary visits. As for frustrations and disappointments people feel, Lynch encourages them to read their policy, which is often written in easy-to-understand documents, nothing like the copious fine print with other types of insurance. “Pet insurance is designed to be used,” says Lynch, making comparisons with rarely used car or home insurance. “Typically, people make multiple claims a year. If you are an active, engaged pet parent, you use your coverage, so read it. Understand it.”

David Markham, a territory partner for Trupanion in Oregon and southwest Washington, remembers how people laughed 11 years ago when he got into the pet insurance world. Now, he feels like the proof is out there for skeptics such as policies with fewer exclusions, different types of deductibles (annual or lifetime), and real claims paid.

“To be honest,” he says, “This was the first time I added all of it up, and the number is overwhelming. I am so thankful we were able to say yes so many different times without regard for cost. She was our first kiddo, and the reason I found this veterinary world l love so much.” Sydney’s list of 33 medical dramas includes claims for mast cell tumors, cataract surgery, glaucoma, foreign bodies, dental extractions, knee surgery and rehabilitation, mitral valve issues, two autoimmune conditions, sudden blindness, fecal transplant, and spinal issues.

“No one of these was a sudden $7,000 decision, but boy, did it add up,” Markham says. “We trusted the veterinarians to do their best with Sydney, and they did an amazing job.”

A domestic shorthair cat named Bud became a clinic cat at AAHA-accredited NOVA Cat Clinic in Arlington, Virginia, around the age of 10, when the team there felt uncomfortable with the request for his euthanasia following a significant bite to his owner’s face.

“He had an attitude, honestly,” says former practice manager Chrissy Davis. “He also had a lot of chronic pain from a horrifically bad declaw probably done when he was a kitten. That contributed to a lot of arthritis and chronic pain, which the owner didn’t really seem interested in treating.”

Bud felt better once he started treatment for chronic pain, but he remained a bit of a pistol. He became a clinic fixture, sporting a vest reminding people not to pet him. While “experiment” isn’t quite the right word, NOVA Cat Clinic purchased policies for Bud and the clinic’s other cat so that they could experience pet insurance as consumers. “At that time, Bud didn’t have a lot of pre-existing conditions,” Davis says. “Everything that happened with him came after the insurance, which is sort of the miraculous part.”

Joking that Bud had “more than nine lives,” Davis details his various medical needs, which added up to somewhere between $15,000 and $20,000 in pet insurance claims. NOVA Cat Clinic’s team diagnosed Bud as diabetic about six months after his pet insurance policy started. Then came the acromegaly/pituitary tumor diagnosis, which required an MRI, CT scan, and more before starting radiation treatments. Then in fall of 2019, Bud developed T-cell lymphoma. That’s when Davis brought him home with her, assuming a hospice situation, since his age, other conditions, and personality made the decision not to do chemo the best choice for his emotional well-being. Davis thought maybe Bud would last a couple of months, but he lived until May 31, 2021.

Alex Brannon works in management and administration at AAHA-accredited Lafayette Veterinary Care Center in Lafayette, Louisiana. Her black Lab, Goose, celebrated his first birthday in May 2021. “Celebrated” is the right word for it, too, because it turns out he eats rocks.

Brannon purchased pet insurance for several of her animals, including a Great Dane and a pit bull/mastiff mix who both lived to be 12 years old. “We couldn’t have kept them alive that long without insurance,” she says. So, Brannon knew Goose could get the help he needed when GI issues came up at six months old and X-rays revealed rocks. “After they took them out, when I saw them, I was like, ‘Oh, yeah, those are definitely from landscaping in our backyard,” she says.

Because of the size (big gravel) and location inside Goose, endoscopy wasn’t an option. “I guess because he was so young, and the rocks weren’t in there for very long, he bounced right back from surgery,” Brannon says.

Thanks to the combination of her employee discount and pet insurance covering 90% of the costs, Goose’s rock emergency only cost Brannon about $200. Goose also suffered a paw injury at day care, so he had two claims in his first year.

Among the 130 or so employees at the practice, Brannon estimates that 90% of them have pet insurance. She jokes that a large chunk of business comes from “all of our dogs getting themselves into trouble.”

“I purchased the insurance because a friend from work had a dog that got injured, and he was forced to make a difficult decision whether to pay for a very expensive treatment,” says Vanev, a systems analyst for the US Department of the Treasury. “He didn’t have pet insurance. When he told me about his situation, that very same day, I did a lot of research on pet insurance companies and purchased Rory’s insurance policy.”

He chose to pay the yearly premium of approximately $350 all at once each year, rather than monthly. Over the years, Rory became a valued addition to Vanev’s extended family, which also includes his brother’s kids, ages five and one.

Fast-forward to February 2021. Vanev found a lump under Rory’s chin while petting him. He says the golf-ball-sized lump seemingly appeared overnight. “The very next day,” Vanev says, “I brought him to our vet for an examination and shortly after they took a sample for testing, and we found out that it was lymphoma.”

Rory is a patient at AAHA-accredited Orchard Park Veterinary Medical Center in Orchard Park, New York. So far, his lymphoma diagnosis and treatment claims top $8,625, and Embrace Pet Insurance has reimbursed Vanev for $6,898.

“It’s been an incredible value and probably one of the best investments I’ve made,” Vanev says.

While Vanev doesn’t try to convince friends about the merits of pet insurance, a couple of them did get policies for their pets after hearing Rory’s story.

As a starting point, many practices discuss pet insurance when clients get new puppies or kittens. The idea is to get them coverage before any pre-existing conditions pop up. The plan doesn’t always work because even young pets from rescue groups and shelters may arrive with little medical issues.

Earlier is better, however, since pet insurance companies often see a J-shaped curve in claim trends—where young pets get hurt or sick a lot in the first 18 months or so, then claims often drop to nothing for many years before climbing again as pets age. But, as cases like clinic cat Bud show, it can also pay off to get coverage for so-far healthy older pets. 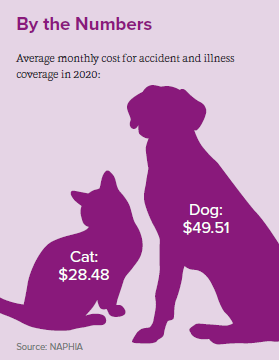 Of course, the biggest claims get a lot of attention. According the NAPHIA, the highest claim payout for a dog in 2020 was $71,603 for a large mixed breed dog with cancer. The highest payout for a cat was for $24,545 for a domestic short hair cat with pneumonia. Some policies come with annual or lifetime payout limits, so be sure clients understand what they’re getting. Not everyone is going to get that much help all at once.

Yet, even everyday claim payouts help families—with as little as $200 to $2,000 making top-notch care possible. That could be X-rays for lameness, blood panels for tickborne infections, dental extractions, hospitalization for accidental poisoning, or surgery for broken bones. One way to learn more about pet insurance is to offer it or partially support its purchase for practice team members. It’s a nice employee benefit, but it also helps pay for care the practice provides to the team’s pets anyway.

For example, NOVA Cat Clinic reimburses team members $50 per month toward pet insurance for their pets. This keeps the practice in compliance with the IRS since giving staff free veterinary care is a big red flag for untaxed compensation. By supporting pet insurance as a perk instead, the practice can charge for services and keep everyone’s financials legal. Maybe even consider trying different policies and companies if you want to compare options and customer service.