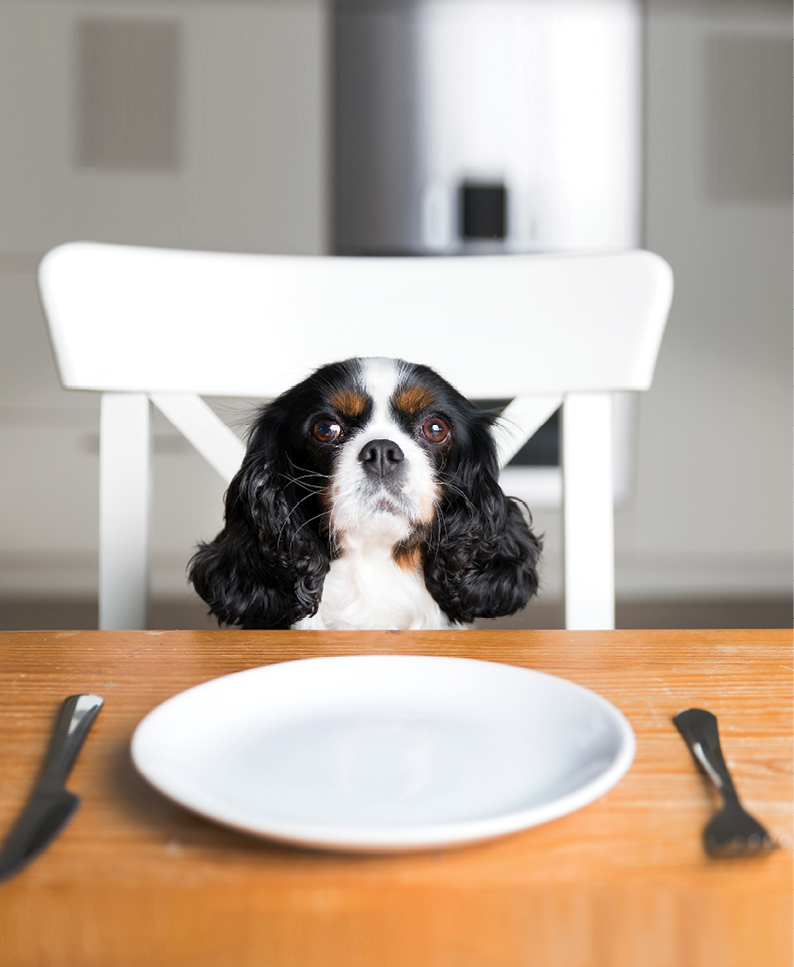 “Owners tend to value variety and complexity, which is not nutritionally essential or beneficial if the diet is balanced and otherwise appropriate.”
—JENNIFER LARSEN, DVM, PhD, DACVN

People gravitate toward home-cooked pet diets for many reasons, including confusion about pet food labels, general distrust, and devotion to pets, particularly when they get seriously sick.

Making a balanced diet at home, however, takes a precise recipe and preparation consistency. Homemade pet food also costs more and raises ethical and environmental concerns. University of California, Davis, professor Jennifer Larsen, DVM, PhD, DACVN, said, “Pets should not be competing with people for food. There are plenty of nutritious parts of animals that people cannot or will not eat.”

Whether they know it or not, families feeding homemade diets need veterinary guidance to avoid nutrient deficiencies or excesses that happen all too easily.

These recipe problems frequently result in diets deficient in some essential nutrients or excessive in others.

Common deficiencies in homemade recipes for cat food include:

“Board certified veterinary nutritionist” became a registered trademark in 2019 in response to others without the proper education and credentials promoting themselves as pet nutritionists.

In addition, 78.7% of the recipes for cats evaluated “did not include a specific taurine supplement–type product,” according to a 2019 Journal of the American Veterinary Medical Association paper.

Some recipes for cats (45.7%) exceeded the safe upper limit for some nutrients, such as:

Among the 94 recipes evaluated quantitatively, the same journal article found that none “provided all essential nutrients in adequate concentrations to meet the [National Research Council–recommended allowances] for maintenance of adult cats.”

Researchers reported similar problems in recipes meant for dogs, including these deficiencies:

All dog food recipes evaluated exceeded the recommended allowance for crude protein, arginine, and pyridoxine. Some also surpassed the safe upper limit for vitamin D or EPA plus DHA.

Recipe writers seem to understand these challenges and create sets of recipes for recommended rotation to make up for nutrient deficits in individual recipes. Rotation and variation also feeds into narratives about nutritional balance over time. However, researchers found that, when assessed together, these groupings of recipes did not result in a complete diet. Several nutrients remained below the recommended allowance or minimal requirement, including zinc, choline, vitamin D, vitamin B12, and vitamin E.

Larsen said, “Owners also tend to value variety and complexity, which is not nutritionally essential or beneficial if the diet is balanced and otherwise appropriate. However, it does increase the already-high cost and workload of home cooking compared to commercial diets and makes troubleshooting difficult.”

Of the 200 recipes for dogs considered, 95% did not meet National Research Council or Association of American Feed Control Officials guidelines for at least one essential nutrient, and 83.5% featured multiple deficiencies.

Consulting with a board certified veterinary nutritionist for a customized recipe remains the best option. If geographic location poses an issue, many offer telemedicine consults.

“I would say 20–40%, maybe even half of the cases I saw, the pet could have very easily eaten either an over-the-counter or a therapeutic diet,” said Cailin Heinze, VMD, MS, DACVN, chief academic officer at the Mark Morris Institute.

But even clients who seek a nutritionist’s help sometimes think they know best. Heinze worked with people who left out salt, thinking it’s bad, or swapped coconut oil for corn oil, or sweet potatoes for white potatoes because they believed the substitutions to be healthier. Corn oil serves as a source of the essential fatty acid linoleic acid. Coconut oil and even olive oil may bring around the same fat calories, but they don’t deliver on the fatty-acid front.

Heinze also worked with clients who insisted the recipe include kelp, despite quality-control issues that may expose pets to arsenic, and another that demanded the recipe include goji berries because they worked for a goji berry company. “I had a client fire me because I told them that the kangaroo that they were buying wasn’t good enough quality to use,” Heinze said. “The nutrient profile didn’t work out. I couldn’t make a balanced diet with it.”

Everyone talks about chicken and rice, but there’s another good option. “For acute GI upsets, I am a fan of cottage cheese and white rice (we typically use a volume ratio of one to one). This combination is very helpful for this, as it’s low in fat and fiber, highly digestible, and often palatable,” said Jennifer Larsen, DVM, PhD, DACVN. “You can keep containers of cottage cheese in the freezer, but it’s also readily available at most grocery stores. Some cats will also eat this, but you can use cooked lean chicken breast in place of cottage cheese as well. Of course, it should only be used short term.”

In the meantime, if symptoms don’t resolve, veterinary practice teams can schedule patients for hands-on care—lessening stress for everyone.

Pumpkin puree often comes up as a cure-all for tummy troubles from diarrhea to constipation. Explaining that there is nothing magical about pumpkin but it probably won’t hurt anything, Cailin Heinze, VMD, MS, DACVN, said, “I’m pretty confident it’s a placebo because if you look at the actual amount of fiber it has versus the volume, it’s not a lot, and that would be the mechanism of action. . . . If I was going to add fiber, I would add a human or an animal fiber dietary supplement so then I know exactly how much I’m adding, and I’m not adding a bunch of other stuff that could complicate things.”

If a consult with a veterinary nutritionist isn’t viable, for whatever reason, a free online recipe-formulation tool offers a decent option—with built-in guardrails to keep diets in a safer zone. It’s called Balance IT, and it’s designed for consumers to use on their own. The tool allows people to choose the species and then the proteins, carbohydrates, oils, vegetables, and fruits they want to use to create a recipe.

The tool lets users see what’s easiest to prepare or has lowest total cost. All recipes include the recommendation of nutritional supplements sold by the same company that runs the online tool.

Larsen said, “Customization is the main benefit of a home-cooked diet, and you lose this if you use a generic recipe. A semi-individualized recipe from BalanceIT.com is also an option, but other internet or book recipes are not advised due to problems with adequacy and outdated strategies for disease management.”

Practices interested in doing more than letting clients brave the recipe tool solo may consider scheduling appointments in which a veterinary technician or team member works through online recipe creation with clients and coaches them on the importance of consistency in ingredients and preparation.

Families need to understand the precision and commitment required and how tiny mistakes or changes alter nutrients.

Inadequate recipes say things like “1 cup chicken and 1 cup rice or potatoes,” with no other details, assuming people should mix the ingredients together somehow. Reputable, trustworthy recipes say things like “40 grams (measured raw) boneless, skinless chicken breast that’s fed cooked,” then go on to specifically explain how to cook ingredients and what to do after that. Good recipes also support compliance by providing the rationale behind using certain ingredients.

The process starts with a reputable and specific recipe and a food scale to measure ingredients by weight (in grams and milligrams).

Ingredient substitutions almost never work out one to one. Heinze explains that, to match 100 grams of 85%-lean ground beef by using chicken instead, it might mean using 70 grams of chicken and a tablespoon of oil. Even things like chicken breasts versus chicken thighs or chicken with skin on or off matter. Remember the sweet potato swap? That tiny canine patient gained 20% of his body weight, which the client reported but kept insisting she’d made no changes in the recipe or food prep.

Get a client handout and infographic to help with your nutrition recommendations!

Even cooking method matters, including time, degree of heat, and whether nutrition databases contain details on how the method affects nutritional content. Example? Boiling beef makes no sense.

Boiling instead of baking adds weight, which is critical in recipe measurements that use grams for accuracy. Moisture content from boiling may result in fewer nutrients per gram. “It could make a significant difference, particularly if you have a recipe that is very carefully formulated for a pet who has health issues, or a recipe that was borderline to begin with in terms of having adequate nutrient levels,” said Heinze.

Many pets eat home-cooked meals featuring diced ingredients, but others pick around, eating only the parts they like. That’s one reason grinding the food in a blender or food processor can help. Heinze says homogenizing food also cuts down on distressed clients calling about pieces of whole foods found in a pet’s stool. “Nothing you eat is 100% digestible, particularly if you don’t chew it well,” Heinze said. “Decreasing particle size of any food not only enhances digestion because it makes it easier for the enzymes to get to it, but it also makes it less recognizable if it is not digested.”

Precision also means following step-by-step instructions—for example, only adding supplements right before serving meals rather than dumping them in during or right after cooking.

Sometimes people use human nutritional supplements, but those products pose other problems, including cost and dosing challenges for pets who are much smaller than typical humans.

There are only a few of the latter type. The best known is sold by the company offering the free online recipe tool mentioned earlier.

Food safety and storage rules for home-cooked pet foods resemble those for people food—about three days in the refrigerator and a month or two in the freezer, depending on how it’s sealed.

People who wing it or use sketchy recipes often counter veterinary concerns about possible deficiencies in a pet’s diet by saying things like, “But she’s doing well.” Yet most nutrient deficiencies don’t present in clear ways quickly and are hard to find through typical diagnostics.

The long-term effects of dietary inadequacies remain a concern. Any attempts at dissuasion from homemade diets only drive consumers into an opinionated world woefully informed about pet nutrition. Better to provide guidance, tools, and referrals to keep pets as well fed as possible—whether the homemade diet is meant for wellness or to support pets diagnosed with serious conditions.