FISSs, largely caused by vaccines (although other materials have been implicated), have been recognized since 1991.56 Three decades later, much about them remains unknown. Within the United States, FISS incidence estimates, although low, have varied by at least an order of magnitude, and worldwide FISS incidence estimates vary by country depending on the relative use of vaccine types (e.g., FeLV, rabies) and population susceptibility.

The Task Force believes that there is currently insufficient research to justify recommending a single vaccine type. Since injection site sarcomas are a risk, the Task Force recommends vaccination in the lower distal limbs to facilitate clean margins if surgical amputation is required.

The Task Force makes the following observations regarding vaccination: 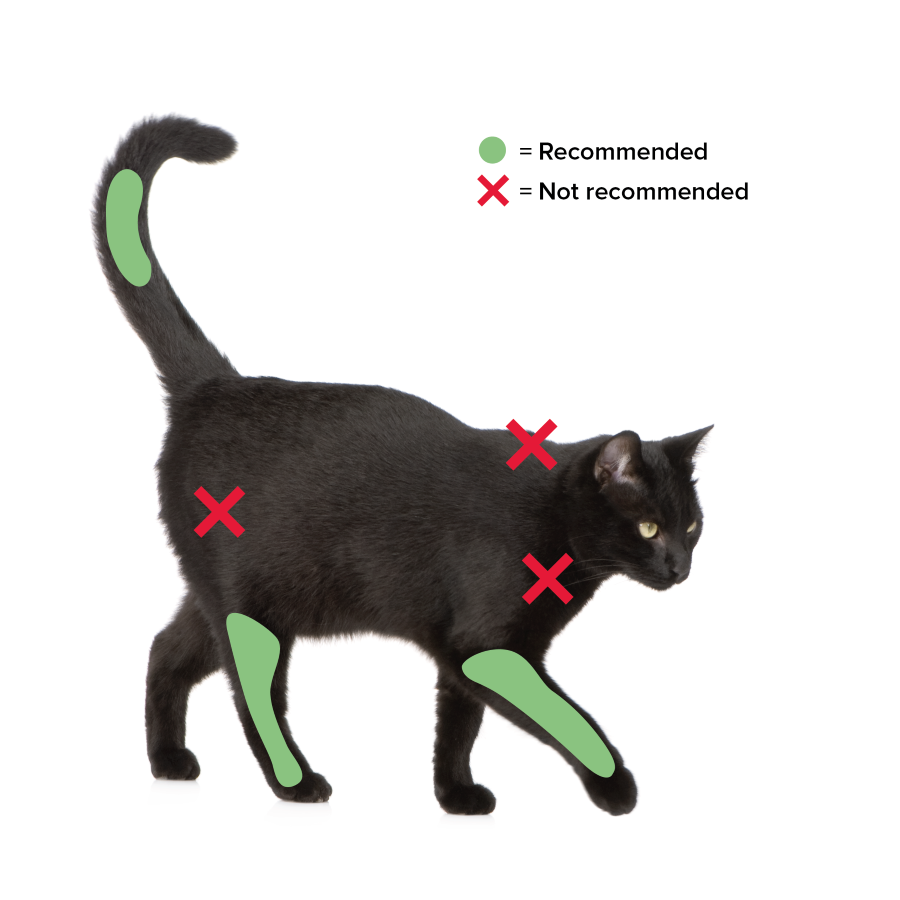 The 2013 AAFP Feline Vaccination Advisory Panel Report included recommendations for specific vaccine antigens to be administered at specific anatomical locations in the distal limbs.1 This technique has helped facilitate the identification of the vaccine antigen used if a sarcoma developed subsequently at the injection site. Since this technique has been widely adopted, these injection-site recommendations have also led to a shift in the site of tumor formation to the distal limbs, thus facilitating potentially life-saving surgery for patients suffering from these invasive tumors.58 The 2020 AAHA/AAFP Feline Vaccination Guidelines Task Force recognizes and supports the value of the 2013 recommendations and recognizes that practitioners may, at times, need to use medically appropriate discretion regarding the anatomical location of vaccine administration. Practitioners are strongly advised to keep complete, accurate records for antigen administration site and route of vaccine administration.

The Task Force offers the following analysis of current research about vaccine safety:

Experimental studies of vaccine-induced inflammation: These studies provide weak evidence for detecting differential vaccination effects on sarcoma incidence yet represent progenitors of the “more vaccine-induced inflammation leads to increased sarcoma risk” conjecture. One immediate problem is that it is unclear how to define inflammation in the context of tumor induction. Macy and Hendrick (1996) cite an unpublished study that defined inflammation as “the size of the local reaction.”59 Grosenbaugh et al. (2004) interpreted it as the presence of “injection-site reaction,” which could have included “scab, crust, swelling, erosion, ulceration, or pain at the injection site or development of lameness.”28 Day et al. (2007) used histopathological scoring that included quantifying neutrophils, lymphocytes, and macrophages (inflammatory phase of tissue reaction); quantifying fibroblasts, collagen, and granulation tissue (repair phase); and assigning a “global severity score” based on biopsy site reactivity and extension of involvement of the tissue section.60 Because the many manifestations of inflammation in cats do not invariably lead to neoplasia, more sensitive biomarkers such as DNA damage may one day be used to distinguish the potential for adjuvanted versus non-adjuvanted vaccines to induce tumors.61 But because none of the cats in the above studies developed sarcomas, such experimental research does not have logical standing to infer relative vaccine safety.

Associational studies of diagnoses: In the past 10 years, two studies based on data from pathology registries have provided contradictory findings. Wilcock et al. (2012) found no decrease in the proportion of “post-vaccinal sarcomas” in feline skin and subcutaneous mass submissions from 1992 to 2010 in a Canadian registry despite the introduction of a non-adjuvanted rabies vaccine in 2000.62 In contrast, Graf et al. (2018) studied the proportion of feline biopsies that were fibrosarcomas submitted to Swiss pathology laboratories between 2009 and 2014 and noted “a marked drop in the relative frequency of fibrosarcoma diagnoses after the introduction of a non-adjuvanted FeLV vaccine into the Swiss market” in 2007 (rabies vaccines are rarely used now in Switzerland).29 Such studies of diagnostic proportions are difficult to interpret. Moreover, they are influenced not only by disease incidence but also by factors related to differential cost and motivation for histopathologic diagnoses, which are subject to change over time. Therefore, there are always competing explanations for findings.

Longitudinal studies of comparative incidence: A study by Srivastav et al. (2012) is the only one to perform a comparative (case-control) analysis of vaccine types in common use in the past 10 years.12 Unlike previous epidemiologic studies, it provides tenuous evidence that nonadjuvanted vaccines may be less likely to induce sarcomas than adjuvanted vaccines. However, the work suffers from sample size limitations and bias concerns.30 Although it arguably serves as an epidemiologic methods blueprint for future investigations, it is insufficient to justify a wholesale recommendation for a single vaccine formulation with as yet unforeseen consequences on population immunity. The Task Force believes that there is currently insufficient research to justify recommending a single vaccine type. Since injection site sarcomas are a risk, the Task Force recommends vaccination in the lower distal limbs to facilitate clean margins if surgical amputation is required.