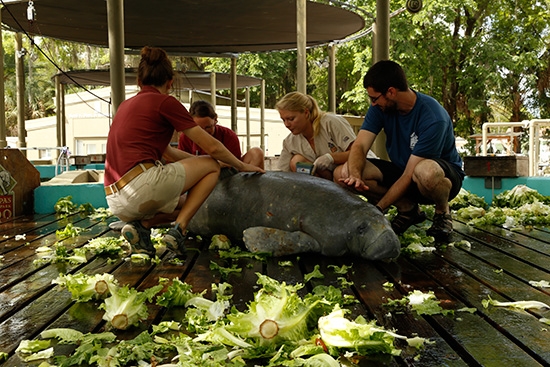 AAHA is excited to announce Tampa’s Lowry Park Zoo as the first zoo in the United States and Canada to earn AAHA accreditation. The zoo veterinary hospital earned AAHA accreditation after an extensive evaluation.

The newly constructed 7,000 square foot veterinary hospital opened in October 2014 as the first phase of the new Jacarlene Foundation Animal Care Campus inside the zoo.

Tampa’s Lowry Park Zoo is a 63-acre nonprofit zoo located in Tampa, Fla. The zoo also has the only nonprofit animal hospital in the world dedicated to caring for injured, sick, and orphaned wild manatees, and works in partnership with the U.S. Fish and Wildlife Service and Florida Fish and Wildlife Conservation Commission (FWC) to rehabilitate manatees for release back to the wild.

The zoo is well-known for its conservation efforts in the Tampa Bay area, throughout the state of Florida, and around the globe. In 2009, the zoo was named the #1 Family Friendly Zoo in the United States by Parents Magazine.

"These animals may not be companion animals, but they deserve the same standard of care as patients at small animal practices," said Ray Ball, DVM, lead veterinarian at the zoo. "I’ve been wanting to do this for a long time—we’re excited to be the first zoo hospital to be accredited by AAHA."

The zoo is also accredited by the Association of Zoos and Aquariums (AZA).

"We’re proud to have the hospital at Tampa’s Lowry Park Zoo join the ranks of our accredited practices and become the first AAHA-accredited zoo in the United States and Canada," said Michael Cavanaugh, DVM, DABVP, CEO of AAHA.

"This is a big step forward for veterinary medicine. Regardless of whether your patient has hooves, wings, shells, or scales, the AAHA Standards of Accreditation raise the level of care that patient receives.

"It’s been exciting to work with Tampa’s Lowry Park Zoo throughout their accreditation evaluation, and we hope to see other non-traditional practices join them for AAHA accreditation in the future," Cavanaugh added. "Congratulations to Dr. Ray Ball, the zoo staff, and the city of Tampa on opening such a fine facility."