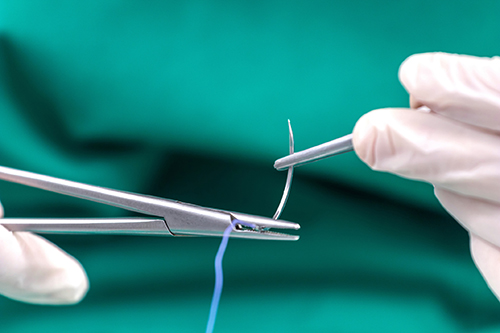 From the Nov/Dec 2020 issue. Subscribe today to get your copy

Historically, it has been thought that suture cassettes become contaminated by bacteria through multiuse. However, High-Quality, High-Volume Spay/Neuter (HQHVSN) veterinarians have been using them for years without issue because of their significantly lower cost. The objective of this study was to determine if absorbable suture cassettes are contaminated through multiuse in an HQHVSN environment. A total of 101 suture samples from suture cassettes were collected from 25 HQHVSN clinics or shelters. The suture samples were placed in an enrichment broth tube and aerobic and anaerobic culture with microbe ID were performed. A total of 17/101 samples were positive for microbial growth, with 11/25 clinics having at least one positive sample. Based on these results, there is a significant risk to using suture cassettes that must be balanced against cost savings. Although HQHVSN veterinarians do not report an increase in infection using suture cassettes, based on the results of this study, there is likely contaminated suture being used during sterilization surgeries at these surgery sites.

Historically, it has been commonly accepted that suture cassettes become contaminated by bacteria through multiuse, although an extensive literature search by the authors in December of 2019 found no evidence-based research on this subject. Suture cassettes are reels of sterile suture in a plastic cassette. Typically, such suture cassettes are “tipped” before use, a process that involves the removal of the portion of the suture that had been left out of the cassette. There are various ways to “tip” suture with the ultimate goal of removing the portion of suture that may be contaminated so that only a portion that is sterile is extruding from the cassette.1 The cassettes typically contain alcohols and other preservatives in addition to the suture.2 The exact preservatives and alcohols of each cassette is proprietary information and may vary between different brands. In academic institutions, students are routinely taught to not use suture cassettes in clinical practice. In contrast, High-Quality, High-Volume Spay/ Neuter (HQHVSN) veterinarians have been using suture cassettes for years because there is a significant cost saving compared with individually packed swaged-on suture. There is approximately a 2–3 times savings in purchasing 2-0 polydioxanone using a suture cassette compared with individually packaged swaged-on suture (One-Dox vendor, personal communication regarding One-Dox PDO, September 18, 2019). With suture cassettes, the amount of suture that is actually needed for the procedure can be obtained. For example, for a routine cat spay, an HQHVSN veterinarian may only use 8–10 inches of suture from a cassette. Thus, a single 25 m cassette of 3-0 may last for 100 such surgeries while the cost of 100 packets of 3-0 suture is significantly more. This would result in over sixfold savings (One-Dox vendor, personal communication regarding One-Dox PDO, September 18, 2019). Anecdotally, HQHVSN veterinarians who are using suture cassettes do not report an increase in incidence of septic abdomens or incisional infections compared with that expected in general practice.

There are no previous reported studies of the occurrence of microbial contamination using suture cassettes. The objective of this study was to determine if absorbable suture cassettes are contaminated through multiuse in an HQHVSN environment. This study will also compare suture handling techniques that may result in contamination to determine if there are common factors between clinics that submit contaminated suture samples.

An email was sent to an HQHVSN veterinarian listserv with 467 members and a separate post was made in a shelter veterinarian–specific Facebook group to identify and recruit veterinarians performing HQHVSN surgery using suture cassettes with monofilament suture. Twenty-five clinics or shelters from the United States that performed HQHVSN surgeries volunteered to participate. A kit with the following was mailed to each clinic: a sterile container with enrichment broth for each sample, a survey to complete (Supplementary Questionnaire 1), return mailing materials, and explicit instructions for sample collection, handling, and shipping. The purpose of the survey was to gather data on specific clinical practices that could contaminate samples. The clinics were instructed to prepare the suture as they normally would for surgery and then to cut off a piece that is approximately 3 inches in length for testing. The piece of suture removed should be what that veterinarian considered to be sterile. Each piece of suture was then placed in an appropriately labeled enrichment broth tube, sealed, and mailed on ice to the Kansas State University Veterinary Diagnostic Laboratory the same day as collection.

The HQHVSN clinics also completed a short survey (Supplementary Questionnaire 1) to collect data on a number of variables including if they serviced shelter animals, client-owned animals, or both; annual number of sterilization surgeries performed; number of veterinarians using the same suture cassettes; how many hours the cassettes were open each day; how often the cassettes are replaced; how the suture was “tipped”; if cassettes get closed overnight; and information regarding each sample itself (i.e., brand of suture, type of suture, size of suture, and expiration date of suture).

A total of 101 samples were collected from 25 HQHVSN clinics or shelters. Each clinic submitted at least three samples. After transport, the samples were submitted to the Kansas State University Veterinary Diagnostic Laboratory for culture. Aerobic and anaerobic culture with microbe ID but without sensitivity were performed.

A total of 17/101 samples submitted were positive for microbial growth and 11/25 clinics had at least 1 positive sample. Table 2 lists all positive samples, what organism was grown via culture, and the amount of growth reported by laboratory personnel of the culture. The annual number of surgeries performed was significantly (P = .032) and positively correlated (r = 0.43) with the total number of samples that were submitted by each clinic. The total number of veterinarians that use the suture cassettes was significantly (P = .049) and negatively correlated (r = –0.40) with the number of positive samples for each clinic. Other survey variables and technique differences, including the type of clinic (shelter, HQHVSN, or both), type of animals serviced (shelter or public owned), frequency of cassette replacement, replacement when empty or on a set time schedule, personnel tipping the suture, type of tipping technique, and training of the individual, had no significant effect on the incidence of positive culture. These data were not provided in this manuscript owing to lack of significance.

When the clinics with only negative samples were removed from analysis, the number of positive cultures does increase significantly (P = .004) with increasing annual surgery numbers.

The objective of this study was to determine if the suture within absorbable suture cassettes is contaminated through multiuse in an HQHVSN environment. This study also assessed a number of variables to determine if there were common factors between clinics that resulted in contaminated suture samples. This study found that there were more samples submitted from clinics that performed more annual surgeries. Unexpectedly, we found that as the number of veterinarians using the cassettes increased, the number of positive-culture samples at those clinics decreased. Other variables, including the type of clinic (shelter, HQHVSN, or both), type of animals serviced, frequency of cassette replacement, replacement when empty or on a set time schedule, personnel tipping the suture, and training of the individual, had no significant effect on the incidence of positive cultures. Of the positive cultures, there were three bacterial cultures with mixed samples. Each mixed sample was from a different clinic. The remainder of the positive samples only grew one organism. There does not appear to be a pattern related to the type of organism grown or mixed growth versus a pure culture.

Based on the total number of positive samples collected, there is a significant risk to using suture cassettes that must be balanced against cost savings. Although HQHVSN veterinarians do not report an increase in overall infection rate using suture cassettes, based on the results of this study, there is likely contaminated suture being used during sterilization surgeries at these sites. If a clinic is experiencing an increased incidence in infection, the cost for treating these infections versus the increased cost of swaged-on suture needs to be considered.

This study did not identify variables correlated with a significant increase in likelihood of contaminated suture; therefore, we cannot recommend changes in handling or technique to reduce the likelihood of having contaminated suture. It is advisable that clinics employing suture cassettes send out suture samples periodically for microbial testing. Clinics with contaminated samples should make changes to reduce contamination or switch to individually sterilized swaged-on suture. Some clinics in this study did not have any positive samples whereas others did, so there may be other factors that were not accounted for in this study.

There are many reasons that HQHVSN veterinarians choose to use suture cassettes despite potential concerns regarding sterility. As discussed in the introduction, there is a significant cost savings, up to a sixfold difference in the cost of using suture cassettes instead of individually swaged-on suture. Additionally, suture cassettes allow the surgeon to have more choice in the size of suture he/she uses. The surgeon is able to use different sizes for different aspects of a single surgery. For example, the surgeon could choose to use a larger-sized suture for the ovarian pedicles and body wall closure while using a smaller-sized suture for the subcutaneous and subcuticular closures. In theory, using appropriately sized suture should lead to fewer suture-related complications. HQHVSN surgeons that use swagedon suture would need to ask for another suture packet to be opened, which would be a significant additional expense. If using cassettes, alternative sizes of suture are readily available and only the amount required for that individual surgery would need to be taken from the cassette.

A limitation of this study was that no control was sent with the kits. Although we would expect all swaged-on individually packaged suture to be sterile, we did not account for the possibility that the suture was collected in a way that broke sterility. We also were not present while suture was collected. There were detailed instructions as to how to collect the suture, but there was no control at each clinic to ensure that no mistakes were made. Therefore, it is possible that much of the contamination found on the samples was from improper collection techniques. Veterinarians may have been more careful of their handling of the suture material for the study than they are in their daily practices, which could have resulted in fewer positive cultures. On the other hand, veterinarians do not typically have to put their suture in a narrow-mouthed tube, so they may have been more likely to break sterility with study samples than in their daily practice. Further studies need to be completed that have a control of either swaged-on suture or a new, sterile cassette where samples could be obtained from. Adding one of these options for a control would have shown if there was contamination in the sampling process.

This project was funded by an internal grant from the Department of Clinical Sciences, Kansas State University.