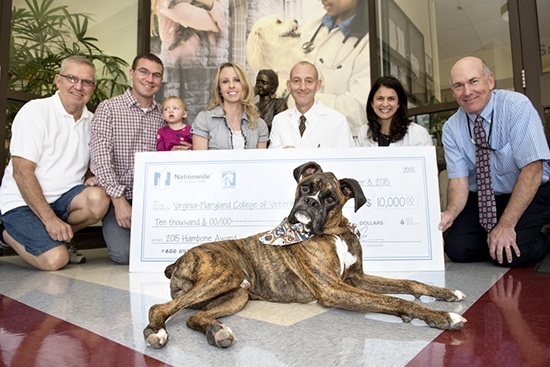 Curtis relaxes in front of his award, surrounded by his family and veterinary staff.

A Persian cat who ate three feet of packaging tape. A miniature dachshund that fended off a rattlesnake. A skewer-swallowing boxer. It was a tough choice but the votes are in.

The Virginia College of Veterinary Medicine, who treated Curtis, will receive a $10,000 Nationwide-funded award through the Veterinary Care Foundation to treat pets whose owners could not otherwise afford treatment.

The Curtis saga began with a family barbeque and a wooden skewer of meat on a kitchen counter. “I saw him grab it and chased him outside,” said Valerie Mould, Curtis’ owner. “I…grabbed the end sticking out of his mouth, but the skewer snapped…and Curtis swallowed it in one bite.”

Mould and Curtis ended up at Virginia-Maryland College of Veterinary Medicine where Curtis underwent an ultrasound and endoscopy. No skewer was visible.

The Moulds monitored Curtis at home. He was fine and then he wasn’t. He stopped playing, didn’t eat a lot, and he shook and yelped when his side was touched.

Another trip to Virginia-Maryland College of Veterinary Medicine revealed a large mass the veterinary team thought might be cancer. Surgery was performed.

The mass was a ball of scar tissue surrounding the skewer Curtis had eaten over a year ago. It had pierced through his intestines and was lodged next to his liver.

Since the surgery, Curtis has made a full recovery.

The Hambone Award® is named in honor of a Nationwide-insured dog that got stuck in a refrigerator and ate an entire Thanksgiving ham while waiting for someone to find him. It honors pets and the heroic actions of Nationwide’s members and their veterinarians.