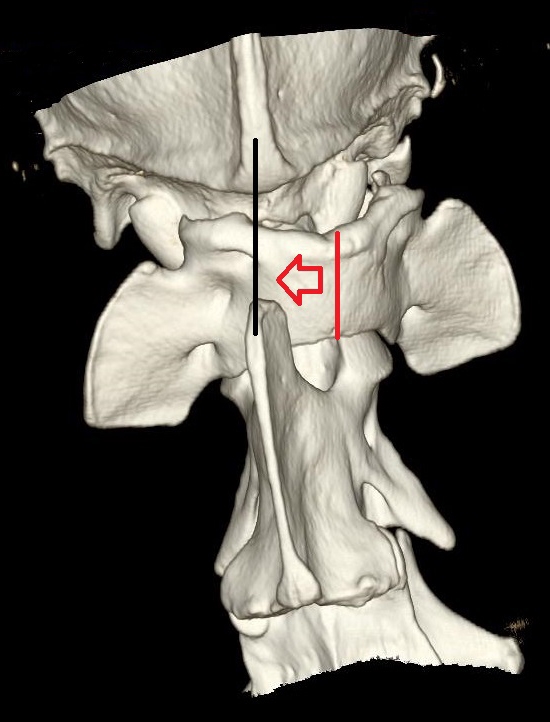 CT scan shows patient’s neck (twisted), dislocating the skull from the spine as indicated by C1 (red line) not being aligned with skull and C2 (black line).

A kick in the head can cause serious neurological issues. Luckily for one canine, what could have been a permanently paralyzing event was avoided.

Neurologists from the University of California, Davis (UC Davis) School of Veterinary Medicine performed spinal cord surgery on a four year old, female border collie suspected of being kicked in the head by a deer.

On May 2, UC Davis announced the success of the surgery and physical therapy; the patient is now ambulatory.

Prior to arriving at UC Davis, the patient was suspected to have tetanus and was treated with an anti-toxin and other supportive care and monitored. Her severe tetraparesis (weakness in all four extremities) did not improve for three weeks.

Once at UC Davis, the patient was diagnosed with an atlanto-occipital luxation (dislocation of the skull from the spine) and fractures of the first vertebra and the back of the skull. These injuries were compromising her spine, causing temporary paralysis.

The surgery involved making an incision behind the patient’s skull to allow the neurosurgeons access to her skull and vertebrae. They then drilled away the top of the first vertebrae and a small area of the back of her skull, necessary to open that area and decompress the spinal cord.