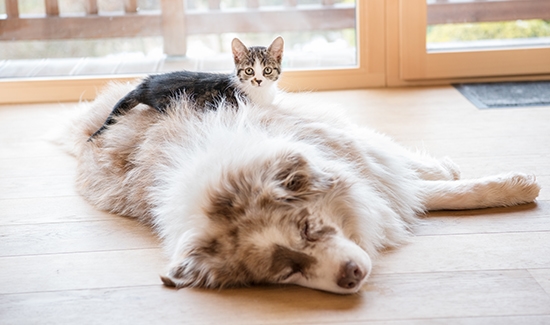 Studies of genomic sequencing and genetic disorders in dogs and cats could soon lead to simplified diagnostics and improved treatment methods.

Researchers at the University of Missouri-Columbia have published three studies in the past several months focusing on whole genome sequencing (WGS) of cats and identifying biomarkers in dogs. The studies aim to determine whether disorders are inherited, how they can be diagnosed, and how a more thorough understanding of these diseases can lead to improved treatment for animals and better breeding practices.

Using WGS, researchers focused on precision medicine, using genome sequencing for treatment of specific cases. The database of genomes comes from the 99 Lives Cat Genome Sequencing Consortium, which aims to do the complete genome sequencing of 99 domestic cats to give a better understanding of disease and allowing for more informed treatment.

In one study, published online in March 2017 in the Journal of Internal Veterinary Medicine, researchers wanted to test the feasibility using genomics as a precision medicine approach. The resources for genetic and genomic testing are more cost efficient than ever, as stated by the researchers, “The sequencing of a cat's entire genome can now be completed for about the cost of a magnetic resonance imaging (MRI) scan.”

For this particular study, the researchers conducted WGS for a cat who had been admitted to the MU Veterinary Health Center for an undiagnosed neurologic disease. The mutation in the cat was identified as NPC1, the gene causing Niemann-Pick type 1, a fatal disorder in domestic cats. While the testing was not able to save the cat, the researchers are optimistic that a genomic analysis approach could benefit undiagnosed cats. Furthermore, other cats with NPC1 could be identified through WGS and efforts could be taken to eliminate the disease variant from the population.

In a second study involving whole genome sequencing through the 99 Lives sequencer, researchers looked at two full-sibling African black-footed cats who had developed progressive retinal atrophy (PRA), the first report of ocular disease in this species. Researchers were interested in testing the cats, which are an endangered species, to determine whether African black-footed cats can be tested for genetic diseases to improve their survival in captivity. The study was published in the March 2017 issue of Scientific Reports.

While there is a large database of normal DNA variants for black-footed cats, they are phylogenetically closely related to domestic cats, allowing researchers to use a domestic cat genome variant database to compare the two. The team sequenced two unaffected parents and one affected offspring to test whether the disease was inherited and determined that the cause of PRA was likely a mutation in the IQCB1 gene. Based on how the variant appeared in other related individuals, the researchers believe the gene is recessively inherited and that other captive black-footed cats could be at risk. They recommend genotyping all captive black-footed cats and improved conservation of this particular cat.

Dogs are also benefitting from new tests. Looking to develop a better diagnostic test for degenerative myelopathy (DM) in dogs, researchers found a biomarker that could make diagnosis easier. This study was published in the Journal of Veterinary Internal Medicine in February 2017.

Degenerative myelopathy in dogs is an adult onset disease that has been confirmed in more than 30 breeds of dogs. The current diagnosis requires finding SOD1 mutations and ruling out other spinal cord and peripheral nerve diseases, but a definitive diagnosis can only be made postmortem. By finding a biomarker specific to DM, dogs with the disorder could be appropriately managed and treated.

Researchers collected cerebrospinal fluid and blood samples from DM-affected dogs and the phosphorylated neurofilament heavy (pNF-H) concentrations from those samples were compared to normal dogs of the same age and dogs with mimicking diseases. The study was developed by noting that ALS in people can be tested by looking at pNF-H, which is released as spinal tissues degenerate. As DM is a neurodegenerative disease, it was theorized a similar approach could work.

The results showed that pNF-H concentration is a sensitive biomarker for diagnosis of DM, although the researchers suggest that the high specificity for this test means a further study with a larger cohort of dogs with disorders mimicking DM should be done. Collecting cerebrospinal fluid is more involved than a blood test, but would be less expensive that the diagnostics currently used to identify DM.

As testing becomes more available and less expensive, further studies could lead to better identification of genetic disorders that will allow veterinarians to better treat and diagnose patients.

NEWStat Advancements & research Veterinary trends News You and Your Vet