AAHA AAHA publications NEWStat® Walk your dog, save your life

Walk your dog, save your life 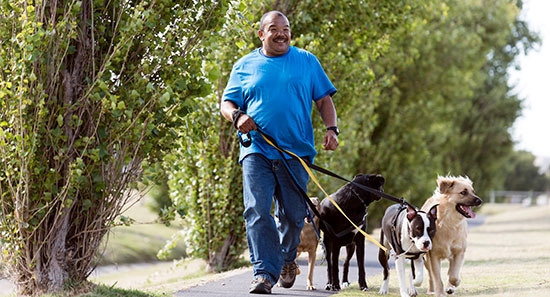 Walking your dog can save your life, depending on how long your walk is.

And you don’t even have to break a sweat.

The study, published last week in the British medical journal The Lancet, analyzed data from more than 130,000 people in seventeen countries across all income levels over an average of seven years.

During the course of the study, researchers found that people who reported two-and-a-half hours of physical activity per week were much healthier than their sedentary counterparts. They were less likely to have heart attacks, strokes, and cardiovascular disease.

In fact, they were less likely to die from any cause.

If you’re a dog owner, it’s likely you’re already seeing the health benefits. Dog owners typically walk an average of 300 minutes per week, or around 43 minutes per day. So, if you’re like most dog owners, you’re ahead of the game by150 minutes a week.

But Dr. Scott Lear, the study’s lead author and a professor at Simon Fraser University’s faculty of Health Sciences in Canada, Lear notes that being physically active doesn’t necessarily mean working out: “Our findings indicate that nonrecreational activity—work, housework, active transportation—is just as beneficial in reducing the risk for premature death and heart disease.”

In other words, just keeping up with household chores, or doing rounds at the clinic, can keep you healthy.

Which means you don’t actually have to walk your dog to get the health benefits of moderate exercise. If your dog sheds a lot, you can get your workout in by vacuuming up all the hair.