Due to an increase in recent call volume, wait times for inbound calls have been longer than usual.
Our members are very important to us as are their questions and inquiries.
We will get to your call as soon as we can; please email [email protected] at any time for additional assistance.
AAHA AAHA publications NEWStat Best friends forever: since when?

Best friends forever: since when? 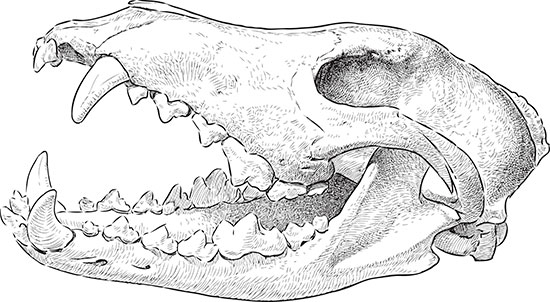 It’s an old question, and opinion is divided. Some scientists believe dogs were first domesticated more than 17,000 years ago, in the paleolithic age, when human beings were hunter-gatherers. Others believe domestication occurred closer to 7,000 years ago, during the Neolithic age, when humans first began farming and living in permanent settlements.

Mandibles may tell the story. Or not, according to a new study.

Researchers in the Department of Ecology and Evolutionary Biology at Cornell University analyzed 3-D scans of ancient canid mandibles to try and discover if they belong to dogs or wolves. The results of their study, published in the September 25th issue of Scientific Journal, indicate that the jury is still out.

What researchers do know is that somewhere in the early stages of domestication, the skulls of dogs and wolves began to change shape. Specifically, the mandible, or jawbone, began to morph. Wolves have long, straight jaws. Dogs’ are curved. It’s hard to see the difference with the naked eyed, but it’s pretty obvious in a 3-D image.

Obvious enough that the researchers were able to use 3-D images to correctly identify a sampling of the mandibles of modern canids as being either dog or wolf with an impressive 99.5 percent accuracy.

For example, 3-D analysis of fossil mandibles from ancient sites in Russia and Alaska occupied by humans between 300 B.C. and 150 B.C. found that most of them could not be classified as either dog or wolf. But at the same time, other features in canid skulls from the same sites as well as other data proved that the samples were dog remains.

And that those dogs were domesticated: the fossils found at the Russian sites were discovered in human dwellings. More to the point, they showed marks consistent with butchery, which indicates the animals were slaughtered and eaten, like livestock.

So if the new study can’t quite tell us when dogs were domesticated, what can it tell us? Possibly, when they weren’t.

A 2013 study that used mitochondrial genomes from 18 prehistoric canids suggested that domestication of dogs may have begun in Europe as long as 32,000 years ago. But a 2015 study contradicts those findings, saying that the identification of the skull in the 2013 study was based on measurements and ratios that were not accurate enough to distinguish dogs from wolves. And the new study reinforces those findings.

Dr. Drake was also involved with the 2015 study, and based on her team’s latest findings, she remains firmly in the Neolithic camp. “The earliest dogs I've seen in my analysis are from 7,000 to 9,000 years ago,” she said.