Study: Want to live longer? Get a dog. 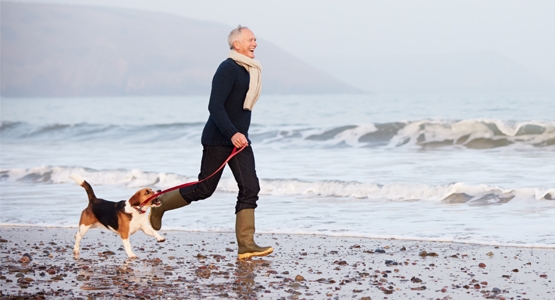 Having a dog is good for your heart.

Especially if you’re a single male over 40.

A new study by researchers at Uppsala University in Sweden indicates that people who live alone are 33% less likely to die over the next 12 years if they have a dog.

The study examined the health records of 3.4 million individuals between ages 40 and 80 with no history of heart disease. Forty-eight percent of the sample were men, and the mean age was 57. The authors of the study note that while research has long associated good health with dog ownership, this study is 100 times larger than any previous study of its kind.

Researchers chose the age range to exclude younger people who were at low risk of cardiovascular disease (CVD) and elderly people who were less likely to own a dog because of their age.

Sweden was ideal place to conduct the study because detailed records are kept on almost every person’s hospitalizations and medical histories. In addition, registration of dog ownership has been mandatory in the country since 2001. By cross-referencing these national databases, scientists were able to compare and examine the health records of pet owners to see if any diagnoses of heart disease or death from related causes popped up.

When the results were adjusted for age and sex, dog ownership showed a clear correlation with reduced risk of heart attack, stroke, heart failure, and other conditions associated with CVD.

The study’s lead junior author, Mwenya Mubanga, said, “dog ownership was especially prominent as a protective factor in persons living alone, which is a group reported previously to be at higher risk of cardiovascular disease and death than those living in a multi-person household.”

In other words, the apparent health benefits of owning a dog were particularly noticeable among single people.

“Another interesting finding was that owners of dogs from breed groups originally bred for hunting were most protected,” Mubanga said.

That includes breeds like golden retrievers, Irish setters, and beagles. Hunting breeds typically need more exercise than other breeds, which may partially account for the results.

According to Professor Tove Fall, the study’s senior author, single dog owners may walk more and have increased interaction with other people. “We know dog owners in general have a higher level of physical activity, which could be one explanation of the observed results,” she said. Perhaps of more significance, “Dogs may be beneficial in reducing cardiovascular risk by providing a nonhuman form of social support.”

All three factors have been linked to increased risk of coronary heart disease and cardiovascular death.