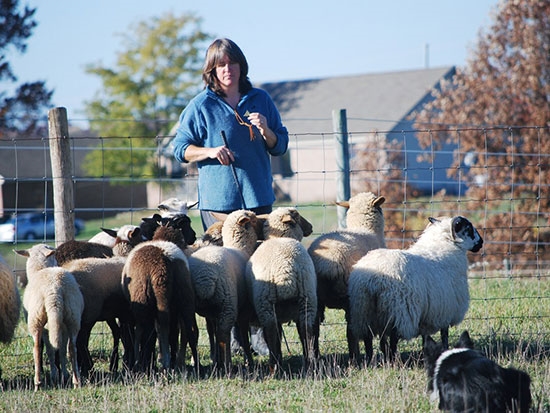 You can do it by modifying your communication system in ways that make it accessible to the species with which you are communicating and by breeding individuals within that species who show the ability to understand the modified system. This is a key component for many dogs bred to be working dogs, be they working sled dogs, herding dogs, or retrievers.

Working border collies show clear evidence that they can understand complex meanings that go far beyond “sit” or “stay.” In addition, there is growing evidence that humans have made language accessible by specifically removing those parts of language that are unique to language. These parts include the ability to communicate about things in the past or future and the ability to create intricate sentences that involve complicated relationships among the different words.

Robin Queen, a linguist at the University of Michigan, has been studying the phenomenon with her own border collies and those of other shepherds. During the past 10 years, her avocation as a hobbiest shepherd has merged with her academic interests into a research project that examines exactly what aspects of language are available to the canine mind. Her ideas drew national attention after she presented them at a linguistics conference in July.

During sheep trials and in regular farm work, shepherds communicate with their dogs using a set of blasts on a whistle. To the uninitiated, it may appear that the shepherd is merely giving a set of commands, but Queen says that’s missing some of the nuance. They’re not just commands, they include details and information about distance, speed, and style of approach. They may give the border collie information about what the livestock will need to be moved efficiently. They may offer encouragement, correction, or simply let the dog know that the shepherd is there and they are still working together to move the livestock.

Shepherds depend on their border collies to do what they are asked but also to let the shepherd know if she has made a mistake in what was being asked.

What’s unique about humans is that we cooperate and share information,” says Evan MacLean, a biological anthropologist at the University of Arizona, in an article in Wired.

“Cooperation leading to the development of language is one of the leading hypotheses for what makes human beings unique among the animals,” the Wired report points out.

It was this element of cooperation that struck Queen: in sheepdog trials, the shepherds and dogs have to work as a team. Flexible communication is key to mutual cooperation.

It’s important to note that “no one knows if dogs understand what the whistles mean in a metacognitive sense,” according to the Wired report. Critics also point out that other dogs don’t share border collies’ linguistic talents—adding some weight to the argument that border collies’ abilities are the result of purposeful breeding.

That’s exactly the point. “They were breeding for temperament or skills, and linguistic ability essentially came along for the genetic ride,” Wired explains.