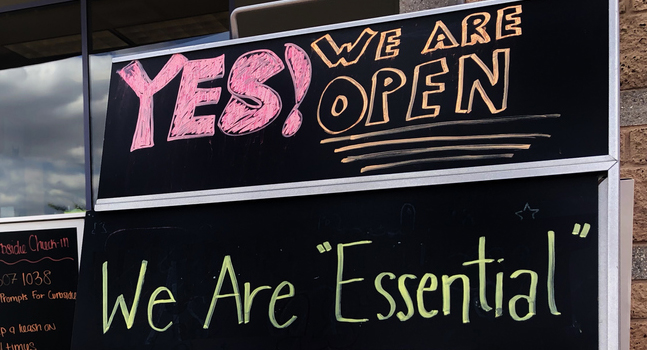 Veterinary practices have been busier in the past couple of weeks than many in the profession had predicted. So NEWStat took an informal sampling of AAHA-accredited practices to see what their caseloads look like at this point in the pandemic.

She says her hospital is up 44% over this time last year and their online pharmacy business is up a whopping 259%. She notes that the hospital was under restrictions until May, so they weren’t doing wellness visits, elective surgery, or low-grade dentistry. “We did do rabies and Leptospirosis vaccinations, as those could negatively affect human health. We also continued to manage pain through acupuncture and chiropractic care, as those [don’t require] any restricted PPE. We also [performed] needed extractions during the restricted period.”

During March and April, Pawsitive’s caseload was limited to illness, urgent care, chiropractic, acupuncture, and vaccinations, but things normalized in May and they started scheduling the spays and neuters they’d put on hold in addition to working through all of the backlogged wellness exams and vaccinations.

Saxon said things seem almost back to business as usual: “This week, we’re pretty balanced in the appointment types. [They’re] more like our standard mix. We did about six telemedicine cases—I love the technology, but it didn’t really take off with our clients. We’re totally curbside except for euthanasia. We already run on a half-hour schedule, so it really wasn’t any different, other than running in and out of the building.”

“We definitely have a higher number of nonwellness cases currently,” she says. She adds that they can’t keep up with demand due to the staff being split up into two teams for health safety reasons, but that should change when they go back to a single team on June 1. “And yes, we have a daily dose of pets we haven’t seen in years, for illnesses but also for updating vaccines.” She says they’ve been 100% curbside since March 1.

McWilliams, like Saxon, says telemedicine hasn’t been a factor. “We’ve offered and been open to [it],” she adds, “but no one’s taken us up on [it] yet.”

Niza DiCarlo, director of human resources at Animal Care Wellness Center in San Bernardino, California, says they’re 100% curbside and booking every available appointment each day while still leaving a couple of slots open for emergencies. “We get new clients every day, and we’re scheduling into the third week of June. Since we are curbside, everything takes longer, so we feel incredibly busy but we’re [down] about 75% compared to last year since mid-March.”

Scott Driever, DVM, owner of Animal Hospital Highway 6 in Sugar Land, Texas, says his hospital’s caseload is just as busy as it was prepandemic but agrees with DiCarlo that things take more time than they used to because, currently, it’s all curbside. He plans to start letting clients back in the building June 1 but says, “we’ll likely keep curbside as a long-term option [because] many people have said they really like it.”

Driever told NEWStat that, as the pandemic continued into April, wellness cases remained fairly steady (they never stopped offering preventive services), while they saw a noticeable uptick in emergency cases that hasn’t slowed down. But for the most part, he says, “we continued with nonelective surgeries, which, when combined with curbside appointments, kept us very busy.” Their caseload is up around 5% compared to last year, he says, but notes that those cases have taken a lot more effort and manpower due to curbside inefficiencies: “Overall income is up only 2–3% for the year, but it feels like it has taken a lot more work to get there.”

Driever also said diagnostics were up because clients seemed to be more open to diagnostics than they were prepandemic: “I am not sure what’s driving that trend, but I’ve talked to colleagues in the area who are seeing the same [thing].”

Pam Nichols, DVM, owner of Animal Care Daybreak in South Jordan, Utah, and AAHA’s president-elect, says her caseload is up, too, but that it’s mostly urgent care—with a healthy sprinkling of new-patient visits.

Many practices seem to be in the same boat—on AAHA’s Accredited Members Facebook page, one member said her hospital was swamped with walk-ins and wondered how to handle the situation.

Nichols has a recommendation for any hospital sinking under an unexpectedly busy caseload: Keep it at “21–24 patients per doctor, max!”

Another member says they’re “unbelievably crazy busy. I feel like we can’t even catch our breath!” She reports two- or three-hour wait times.

Many members echoed Driever, saying that, as busy as they are, the number of patients they’re seeing per day is actually lower because curbside appointments take longer. So even though hospitals are slammed, gross income is down slightly in some cases.

Meanwhile, Crystal Davis, an LVT at Armistead Ave Veterinary Hospital in Hampton, Virginia, told NEWStat she just took home her biggest paycheck ever thanks to a staggering and unprecedented amount of overtime.

“Thankfully, my owners are DVMs, and they’re alongside us in the trenches for this whirlwind time,” Davis added. “We’re all kicking [butt] every day.” She also knows she’s working hard for the money and acknowledges that the caseload is taking a toll: “I leave [work] physically and mentally spent, but you can see all the cases we have a hand in helping and it makes it all worthwhile.”