A Black veterinarian on the lack of diversity in the profession

Will Draper and Françoise Tyler at their 1991 graduation from the College of Veterinary Medicine at Tuskegee University. Photo courtesy of Will Draper

Will Draper, DVM, wanted to be an engineer when he grew up, like his dad. And, like his dad, he wanted to go to Tuskegee University in Alabama, perhaps the most storied historically Black college in the US.

His dad thought Tuskegee was a fine idea. Becoming an engineer, not so much. “The problem with you wanting to be an engineer,” his father told him, “is that you need to be proficient at math. Which you are not.”

Draper’s grandmother, another Tuskegee grad, suggested veterinary medicine since he loved animals. As it happened, Tuskegee had a veterinary school, so Draper wound up fulfilling the first part of his childhood dream. It didn’t occur to him at the time that he, as a Black man, was entering a profession that was, and remains, overwhelmingly white. He says his naivete was due to a combination of “upbringing and ignorance.”

Draper and his wife, Françoise Tyler, DVM, own three AAHA-accredited practices in the metropolitan Atlanta area under the umbrella name of Village Vets.

He grew up in 1980s Inglewood, California, with parents who were both college graduates with careers. They had similar goals for their kids, and all four siblings ended up at Tuskegee.

Draper’s mom, who taught elementary school alongside white, Asian, and Latino colleagues, knew the value of diversity. “My mother always made a point to engage us with those teachers, their families, and their children,” he says. “My parents never made me feel there was anything I couldn’t do because I was Black.”

But going to school in Alabama meant being continually reminded of his ethnicity: “Every now and then I’d be driving through Auburn and somebody would yell, ‘N*****, get out of here!’” Draper didn’t let it upset him. “I didn’t stop my car or get in any fights, I’d just think, ‘Well, that’s his problem, not mine. I guess his parents didn’t raise him like my parents raised me.’”

After graduation and a year’s internship at a hospital in Maryland, Draper returned to the Deep South, in part to court his wife, whom he’d met at Tuskegee and who was doing her internship at the University of Georgia. They decided to settle down and he started looking for a job. Even in the Deep South, he says, he never considered that the color of his skin would keep him from landing a position. “It was just this ignorance [about race] that my parents put in me, which has been a big part of my success in my life,” he says. “I’ve never thought there was something I couldn’t do.”

He landed a job and brought his parents’ belief in the power of diversity with him. He’d need it.

Just after he started working at a hospital in Tucker, Georgia, a longtime client brought in a Chihuahua named Tiny who was suffering from congestive heart failure. Tiny’s regular veterinarian, a white woman at the practice who’d been seeing him for years, wasn’t working. “I was the only vet there, and the client told the staff his dog wasn’t going to see a colored doctor,” Draper recalls. “I was 25, 26, and I understood that my job was to see his dog regardless of how he felt about it. So I told him, ‘You don’t have to see a colored doctor any day but today. Because I’m the only doctor here and your dog is dying.’”

Reluctantly, the man let Draper look after Tiny—but refused to speak a word to Draper the entire time. Still, when it came time for a recheck, the man came back. “And that time, he came to see the colored doctor,” Draper says. “Then it got to be he would only see the colored doctor. We’d talk during the exams. We got to know each other well.”

A year or two later, when it was time to put Tiny to rest, “[His owner] wouldn’t let anybody touch that dog but me.” Draper says the man, whom he calls The Colonel, was probably close to 80 by that time, and Draper was under no illusions about his views on race. “That man could very well have a picture in his basement with his friends standing in front of dude who got lynched,” Draper says. “What I understood was that we came from different worlds, but we both felt a connection to and a responsibility for Tiny. Tiny brought us together. It made him a little bit better and it made me a little bit better.“

“If people would just step back and understand that the color of your skin doesn’t define who you are, we could just be so much better [as people],” he says. “It’s disheartening to me that I’m having conversations with my children that my father had with me when he drove me from California to Alabama to start college in 1984. I tell my son, ‘If the police stop you, I need for you to take your phone out and record it, and say you’re keeping your phone out because you’re concerned for your wellbeing, but you’re here to comply. Do what they tell you to do, and make sure you get out of there alive. I don’t want to get a phone call that something happened to you because you asked a question like Why are you doing this? Why did you stop me?”

Draper pauses, then continues softly: “I shouldn’t [have to] be having that conversation in this day and age.” 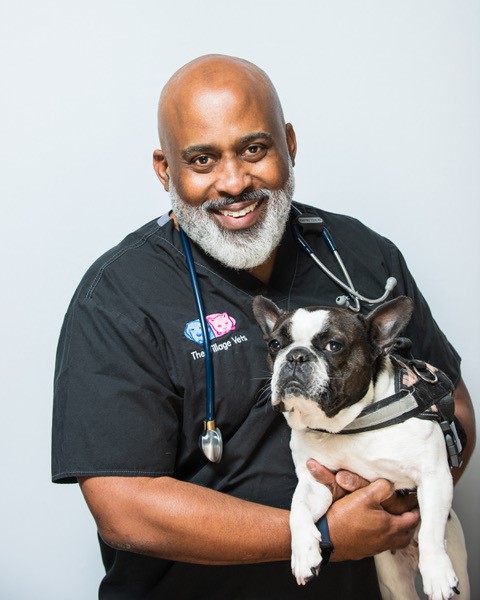 “If people would just step back and understand that the color of your skin doesn’t define who you are, we could just be so much better [as people].”
—Will Draper, DVM

Even though Draper has built a hugely successful private practice in Metropolitan Atlanta—he’s opening five more hospitals in the next year—and pharmaceutical companies invite him to weekend junkets at luxury resorts, he still finds himself something of an outsider at those events. “You get to hobnob and bump elbows with a lot of people from across the country who also have large practices,” Draper says. “My wife and I have endured many of those, but I don’t care if they invite 30 people or 300, we are always, always, the only two African Americans, the only two Blacks. And that’s a problem.”

One of Draper’s goals is to help change that. “By the time I turn 60 in seven years, [if] I go to one of those meetings, I need to see more diversity there. Not just for African Americans, I mean for all people of color.”

Draper’s trying to do his part at his own hospitals, where he offers students graduating from veterinary school the opportunity to hire on at Village Vets, train for a year, and then move up to become a managing partner. He generally hires the most qualified candidate, regardless of race. Currently, 8 of the 25 veterinarians on staff are Black—and 2 of whom are male.

Draper believes change is possible, and that the profession can encourage more diversity by starting to talk to kids while they’re young. That’s why he makes it a point to attend career days whenever he can. “It’s amazing how many times some young Black person will say to me that they’ve never seen a Black veterinarian before.”

That’s also why, In 2017, Draper and his wife did a three-part television pilot for the National Geographic Channel, a proposed reality show about a married veterinarian couple. He says the producers weren’t necessarily looking for a Black couple, but the Drapers just happened to fit the bill in every other respect. The show didn’t get picked up, but those three pilot episodes can still be streamed on Disney+.

Draper’s glad they do, but not for the reasons you might expect.

“It’s not about the money, it’s not about trying to be famous,” he says. “It’s about letting that little African-American child who’s sitting at home being homeschooled and doesn’t really know what he wants to do see me and go, ‘Wow, I can do that!’”

He wants children of color to know they have options: “They need to know they can do whatever they want to do. Reach for the stars. I instilled that in my own kids.” It’s working—his youngest, 17, plans to become a veterinarian.