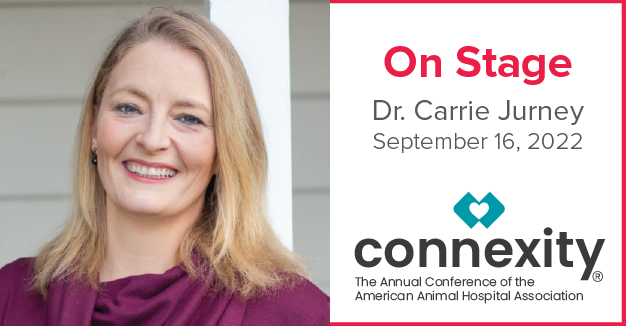 Connexity keynote speaker Carrie Jurney, DVM, DACVIM, was boarded in neurology in 2009, but found her true calling when she took over the presidency of Not One More Vet (NOMV) in February 2020, right at the start of the pandemic.

“We had no idea what hardships the next year would bring,” Jurney told NEWStat. “It’s been a wild ride.”

NOMV, now the largest wellness-focused charity for veterinary wellbeing in the world—membership rose to 25,000 members during the pandemic—helps veterinary professionals cope with crises and compassion fatigue.

Why it’s been so bad during COVID

Jurney acknowledged that veterinarians certainly weren’t the only people who experienced stress during the pandemic: “The whole world was going through a traumatic experience, but the specifics of how we work and how we interact with our clients really made it a lot harder.”

The switch to curbside care was just one example.

Jurney said NOMV experienced exponential growth during the pandemic. (She pronounces it NOM-vee “because Not One More Vet is a mouthful.”) She said NOMV’s services were needed, and NOMV’s grants program is a good example. “In 2019 we gave out something like $30,000 in financial aid to veterinary professionals. In 2021, it was $150,000.”

She said that jump shows the increase in need. “I’ve been really inspired by how much the veterinary community has stepped up to help us provide that support.”

What makes NOMV’s membership growth notable is the fact that there’s long been a stigma associated with seeking therapy and support for emotional stress.

Jurney notes that when researchers polled presidents of state veterinary medical associations in 2015 on their reactions to the unusually high suicide rate among veterinary professionals, the results were sobering: “Only 30% of them believed our increased risk of suicide was even a problem.”

Fortunately, awareness of the problem has grown since then, due in part to a landmark 2020 study of the prevalence of mental illness and levels of wellbeing in the veterinary profession conducted by the AVMA and Merck Animal Health. And a 2019 study by the US Centers for Disease Control and Prevention showed that female veterinarians are 3.5 times more likely to die by suicide than members of the general population. Taken together, the studies confirmed what many in the profession already suspected: a lot of veterinarians—and veterinary support staff—were in serious emotional trouble.

As someone who’s been speaking on veterinary wellbeing since 2015, Jurney says she’s seen a gradual but steady change in how we talk about wellbeing as a profession: “I think the stigma is decreasing, but I still think we have a ways to go,” she adds. “If you conducted that poll today, I think the result would be a lot different. The fact that I was invited to give the keynote at Connexity is proof of that.”

Contrast that to when she gave her first wellbeing lecture just a few years back; she was given six hours to talk about neurology, and one hour to talk about wellbeing. “And that one hour was going to be at 6 a.m.”

“Now we’re at the point where we have entire tracks devoted to wellbeing, and people like me talk about it during the keynote,” she says. “So the profession has come a long way in talking about the problem. The next phase is working on it and starting to solve the problem.”

It won’t be easy, but as Jurney notes, people in the veterinary medicine profession are fixers: “And we can fix this.”

Hear Carrie Jurney talk about how to improve veterinary wellbeing this September in Nashville. Register for Connexity today.