A comprehensive knowledge of oral and dental anatomy and physiology is imperative for recognizing and treating disease in the oral cavity and teeth. Veterinarians must understand the location, purpose, and function of the structures of the head and oral cavity shown in Figure 1.3–5 Dogs and cats have two generations of teeth (diphyodont), with the roots being longer than crowns. Most of the permanent tooth is composed of dentin, with the central portion of the tooth being the pulp chamber containing blood vessels, nerves, lymphatics, connective tissue, and odontoblasts.6 The tooth supporting structures, or “periodontium,” consist of the gingiva, periodontal ligament, cementum, and alveolar bone. The periodontal ligament attaches the tooth in the alveolus by being affixed between the cementum and the alveolar bone.3,7

Anatomy of a tooth 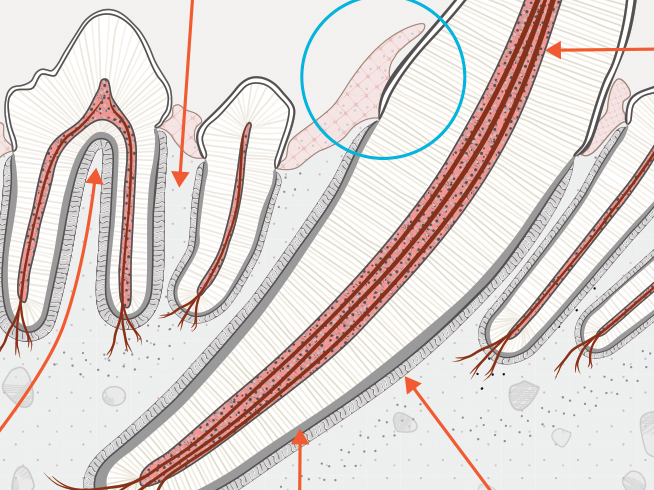 There are many pathologic processes that affect the oral cavity of dogs and cats (congenital, infectious, traumatic, neoplastic, autoimmune, and others). The most common and significant disease is the inflammation of the tissues of the periodontium, or periodontal disease. The clinical terms used to describe the active process of periodontal disease include gingivitis and periodontitis. Gingivitis, the earliest stage of periodontal disease, is described as inflammation confined to the gingiva and commonly induced by bacterial plaque. Gingivitis is reversible and preventable.8,9 Plaque-induced gingivitis can be reversed by removal of the bacteria above as well as below the gingival margin and prevented with consistent plaque-removing home oral hygiene efforts.10 Calculus, or bacterial plaque that has become calcified by salivary minerals, is mostly an irritant and is relatively nonpathogenic.8,9

The bacterial population at the tooth surface is initially composed of gram-positive, aerobic bacteria. The bacterial biofilm eventually invades the sulcus between the gingiva and the tooth, creating an environment selecting for a more destructive anaerobic,gram-negative population.11 The bacterial byproducts directly cause tissue injury resulting in host inflammation, which directly contributes to loss of attachment between the tooth and periodontal structures. If left untreated, the chronic inflammatory host response can progress to periodontitis.9 Periodontitis is an inflammation resulting in irreversible loss of the supporting tissues of the teeth, progressing from periodontal ligament attachment loss to the loss of alveolar bone, resulting in clinically detectable attachment loss. Although this process can be stabilized, it is not easily reversible and can ultimately lead to tooth loss. Other factors influencing the progression and ultimate severity of periodontal disease may include breed predisposition, malocclusion, chewing habits, systemic health, and local irritants.12

Fractured teeth have been reported in up to 49.6% of companion animals.13 In the case of a complicated fracture (pulp exposure), the pulp chamber becomes contaminated by oral bacteria and proceeds to infection and necrosis, resulting in periapical infection.14 Tooth resorption is also common, affecting 27–72% of domestic cats and fewer dogs, and is caused by odontoclastic destruction of teeth. Although the etiology of these progressive lesions remains unproven, gingival inflammation and exposure of the pulp chamber can be the result.15 These are some of the most common pathologies encountered in veterinary general practice and are associated with various painful stages during the course of progression. Practitioners can supplement their education and experience by consulting the growing body of literature and online resources on the oral pathology of dogs and cats.